You are here: Home › News: The First Adaptation of the 12th Century Poem Widely Recognized as World Cultural Heritage in Literature | CitizenWire
By Roderick Kinnison on September 27, 2022 in All Stories Index, Business, Entertainment 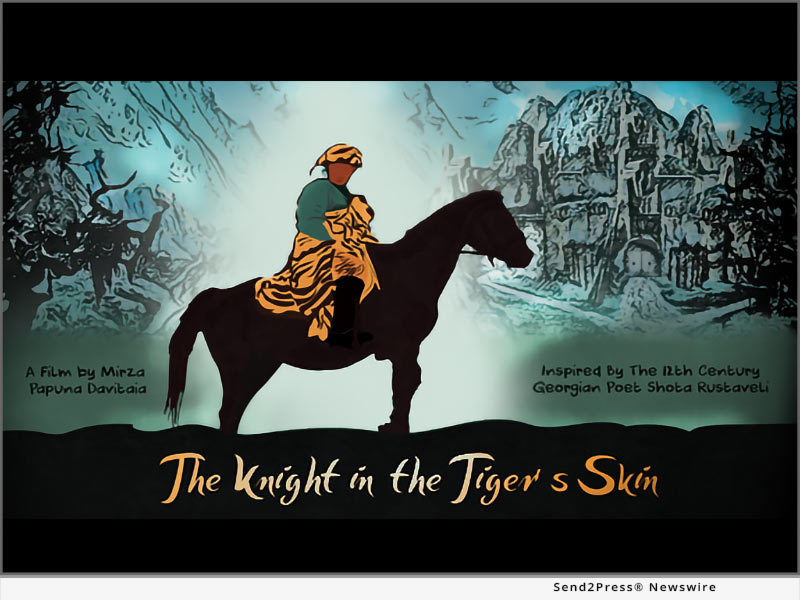 LOS ANGELES, Calif. /CitizenWire/ -- A new animated film "The Knight in the Tiger's Skin" by Mirza Davitaia, of GI-Films, will be released in the Laemmle Theater on October 7, 2022. This is the first adaptation of the medieval poem by Shota Rustaveli.

The poem "The Knight in the Panther's Skin" is one of the greatest world literature pieces and by many historians is considered as one of the most significant poems in the history of medieval literature.

"I am a visual artist and filmmaker who moved from Eastern Europe to the United States eight years ago. I come from a culture that is very old and unique. For centuries Georgia has been at the crossroad of civilizations and has been influenced by the East as well as by the West. Many compelling stories have originated from the region of the Caucasus which are still awaiting to be discovered by western audiences," says writer/director Mirza Davitaia.

"Some scholars have suggested that Rustaveli's poem 'The Knight in the Panther's Skin' alongside with Gorgani's 'Vis and Ramin' may have influenced the Tristan and Iseult legend and even Romeo and Juliet.

"My mission is to bring this incredible story to a broader audience. Even so, I have changed many things to make it more relevant to a contemporary audience, the main plot remains the same as it is in the poem."

The movie was made with an experimental approach by combining rotoscope, traditional 2D and 3D animation techniques.

Mirza Davitaia is a filmmaker who has written, directed and produced both animated and live-action movies since 1993.

In 2016, Mirza created the graphic novel "The Knight in the Tiger's Skin" (AKA Prince of India). The book was published by major Georgian publisher "Artanuji" and was nominated by Georgian Public Broadcaster as the Best Literary Work of 2016 for "The Best of the Year Award."

In previous years, Mirza has produced and written several live-action movies, including "The Narrow Bridge" in 2021, "The Last Fortress" in 2020, and "Anton" in 2019 which was directed by the Oscar and the Golden Globe-nominated director, Zaza Urushadze. In 2010, Mirza produced an action thriller "5 Days of War" starring Andy Garcia, Rupert Friend, Val Kilmer and other A-list Hollywood actors. In 2013, he co-produced a comedy "Jacky in Women's Kingdom," starring Charlotte Gainsbourg and Michel Hazanavicius.

Mirza Davitaia was born and raised in Georgia. Where in the years of 2004 to 2012, he served as a member of Parliament, Chairman of Parliamentary Committee, Deputy Minister of Culture and Monument Protection, as well as the State Minister of Diaspora Issues.

From 1992 to 2000, Mirza studied animation, illustration, graphic design and fine art in Academies of fine art in Tbilisi, Georgia and Nuremberg, Germany.

Link to the trailer: "The Knight in the Tiger's Skin" - Trailer - YouTube - https://www.youtube.com/watch?v=7Ju1WEOIfBg