You are here: Home › About CitizenWire › About Our Staff

CitizenWire™ (aka CitizenNewswire™) is a publication of the Neotrope® News Network.

About our Editorial Team
We have staff all over the U.S. who write for us exclusively, and an editorial team with professional journalism credentials.

Citizen Journalists
Additionally, anybody based in the U.S. may request a log-in/password to post relevant news, articles, op-ed, and content as “citizen journalists” (requires verification). We do not allow paid articles or “sock puppets” who post content on behalf of companies pretending to write as a third party. Please see the registration page for more information.

The staff members below are full-time members of our editorial board for CitizenWire.com and the Neotrope News Network. 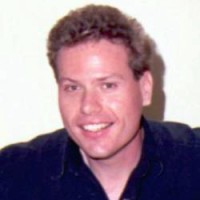 Christopher Laird Simmons is the founder and President of Neotrope® which is involved in entertainment, marketing and PR; both online and in traditional venues. He is a current member of the Public Relations Society of America (PRSA), and the American Society of Composers, Authors and Publishers (ASCAP).

He has written for a wide variety of national and regional print publications including Computer Player, CrossMedia, Digital Imaging, Print on Demand Business, Micro Publishing News, Polyphony, Search Engine Intelligence, and Spazz. His business articles on graphic design and Web development were also reprinted by the Graphic Artist Guild in several issues of their member newspaper. As the founder of a small publishing company (Mindset Press, now Neotrope Press), he developed over thirty small press publications and “fanzines” between 1987 and 1990, including one that was featured in the “potpourri” section of Playboy magazine. He is the author of a digital art book, fractopia (2008, Neotrope Press, ISBN 978-0-9710555-0-6 hardcover).

He has art directed numerous magazines, and was the Chief Creative at the PhotoVentures ad agency from 1982-1987. He has won two Harvey Measurement awards for most responsive magazine advertising, and an ARPL design award from Apple Computer in 1993.

He has been widely interviewed by publications like PC World on Linux Web hosting (he operated a Web hosting business from 1997 to 2005), TrendWatch on PDF technology, three times by Entrepreneur magazine on PR and marketing (2003, 2005, 2006), and been invited to speak at Seybold, and the annual meeting of the American Intellectual Property Law Association, among others. He has been interviewed numerous times for Internet radio and Podcast programs over the past six years related to public relations and Internet marketing topics.

As a photographer he has won numerous “best of show” awards for abstract, glamour, and portrait imagery. He has also created photographic and 3-D imagery for over three dozen national magazine covers. His abstract digital artwork was selected as the cover for the 1997 Science and Technology Course Catalog for the California State University Long Beach (CSULB) and has been featured in numerous major art installations including the 1997 Bytes of Art project in San Francisco. He created his first computer graphics for the Adventure International Atari 8-bit computer game Stone of Sisyphus in 1983.

He has composed music themes for two cable TV programs, including the award-winning VidKidCo, produced by the Long Beach Museum of Art’s Video Annex. As a musician he performed in several bands in the ’80s, including “Pets Gone Wild” that was featured in the L.A. Times Calendar section, and was an L.A. Weekly “band name of the week.” He released numerous independent self-produced albums of electronic music in the ’80s under the name “Bluetoy,” which were played widely on late-night alternative music radio shows, and reviewed favorably in music magazines like Electronic Musician. He re-mastered and re-released the albums on CD under his own name between 1996 and 2000 (his CD Beserker is available on iTunes, Napster, CDbaby, Amazon.com).

Liisa writes for several national and regional magazines; daily and weekly newspapers; and business-to-business newsletters. Before joining the Neotrope News Network, she worked as an editor for a national medical publishing company where she managed a team of writers and did market research for new launches. Liisa also worked in the catering business for several years, and as a result, specializes in writing about the food and beverage business and has two monthly columns that feature chefs and wine experts.

Liisa received her Masters in Media Studies from the New School for Social Research in New York City and is currently a member of the Public Relations Association of Western North Carolina. She resides in the beautiful town of Asheville, NC in the heart of the Blue Ridge Mountains; she lives there with her husband, Bryan and Black lab, Annie. 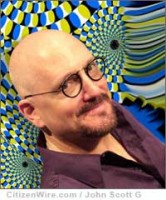 John “Scott” G is a partner in Golosio Publishing (www.golosio.com) which creates and licenses music for songs, commercials, films, and TV. A related company, FookMovie, creates videos for recordings in their catalog.

He is also owner of G-Man Marketing, an advertising and communications firm in Los Angeles. Mr. G has created advertising campaigns for hundreds of clients, and has written/produced radio commercials and corporate broadcasts for such as Goodrich, General Dynamics, Verizon Wireless, Yale Hospital, American Cancer Society, DIRECTV, Micron, Legoland, the Auto Club and many more. If you have opened a newspaper, flipped through a magazine, or listened to the radio in the past two decades, your purchasing decisions have been influenced by the work of Scott G and his firm.

He is also the recording artist known as “The G-Man”=,” with his albums distributed by Delvian Records and available on iTunes. He’s a voting member of NARAS (the Grammy® organization) and regularly writes about communications, marketing and advertising for many publications and Web sites.

Roddy “Sam” Kinnison is a freelance writer, and is responsible for data import, sync, and systems management for CitizenWire. Based out of Oklahoma, Sam writes under several names, and is a huge fan of singer Alison Moyet. He wanted to be a comic book artist when he was younger, but was too lazy to get really good at it, and found he’d rather write stories than illustrate them. He is fully self-taught with no formal training in writing or copy-editing beyond the wonderful resources found at every public library in the USA.

Jennifer is one of the managing content editors for CitizenWire, and has been a team member of the Neotrope® News Network since Dec. 2008. She is a creative writer, former surfer girl, and currently resides in South Florida. She paints, is a foodie, and owns two pure white tabby cats who prefer their identities be kept secret (and no, they don’t have their own Facebook page).

Topher J. Zane is an intern editor at CitizenWire.com responsible for overseeing selected content. Topher (aka “TJ”) is currently in school hoping to become a technical writer and author. He would like to write manuals for electronic music instruments, Mac audio-units plug-ins and virtual instrument software, as well as how-to guides for musicians who use computers. He is located in the Pacific Northwest.

Raychel Harvey-Jones is a Multi Media Journalist born in the UK, Raychel re-located to the USA to report and produce weather and news segments for Bloomberg TV. As a reporter she has covered world politics and conflict in the Middle East. Her most memorable assignment was covering the assassination of controversial politician Benazir Bhutto.

Prior to moving to the USA, Raychel worked as a journalist and reporter for several media outlets including print, radio and Television.

Raychel has appeared on air for Aljazeera, ABC news now, NJN and is a regular contributor to Ebru .tv based in New Jersey. She currently writes for various online publications in addition to media relations consulting for financial companies in California. She is thrilled to be part of the CitizenWire writing team.

Anne is a free-lance writer and editor. She most recently worked as content editor for a book written by a retired Pentecostal pastor’s wife. During her lifetime, she has worked as a nurse’s aide, waitress, office manager, marriage counselor, free-lance ghost writer, and house wife. She was married for 46 years before being widowed 7 years ago. She has two sons and currently resides in the high desert of Southern California.

As hobbies she likes to make her own clothes, craft and repair costume jewelry, quilt, and prepare gourmet meals for her wide circle of friends. She also mentors younger adults who are troubled and in a transitional period in their lives. She’s a wicked canasta player and loves to play partners with her 90 and 80 year old friends. Anne is currently in her early 70s.