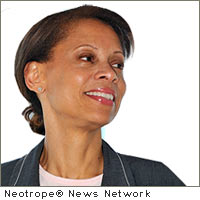 “I believe I am the most qualified person on the ballot to represent the people of New York State in the U.S. Senate, and I am willing to prove that point,” Goode said. “It is time for Ms. Gillibrand to step out of the shadows and introduce herself to the people of New York State. It is time for her to explain who she really is, and what she really believes. She has been the ‘Unknown Senator’ for far too long.”

Goode will appear on the Democratic primary ballot, as the 45,000 petition signatures she filed on July 14 have not been challenged. Goode filed three times the required number of signatures, representing 24 of 29 Congressional districts in New York State.

Goode challenged Gillibrand to a series of six debates – one a week until the primary – in Buffalo, Rochester, Syracuse, Saratoga, Poughkeepsie and Brooklyn.

“Let’s bring this discussion to the people and let them determine whose values best reflect New York State,” Goode said. “Free and open debate is the only appropriate way help people choose a senator. We’ve seen what happens when decisions are made in back rooms – the people of New York State lose.”

Goode, who has served for 24 years as trial attorney for various New York City agencies, said she is undeterred by Gillibrand’s campaign war chest.

“I’m very used to battling private, well-funded attorneys,” Goode said. “But I’ve never given up and I will not give up in this fight. If Ms. Gillibrand really does want to represent New York, then she should do what all real New Yorkers do: Step up and show she’s willing to work for what she wants.”

News Source: People For Gail Goode :: This news story was first issued by and is Copyright © 2010 the Neotrope® News Network – all rights reserved. Originally published on CitizenWire™.