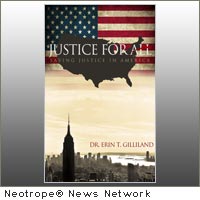 KANSAS CITY, Mo. (CitizenWire) — The elections are just around the corner and with them comes the timely release of a new book, “Justice for All – Saving Justice in America” (ISBN: 978-1-60264-634-6) that focuses on hot-button issues such as illegal immigration, healthcare reform and government debt. For the past five years, the author, Dr. Erin Gilliland, has worked on this book and is now anxious to share his ideas on freedom, equality and justice for all. He’s eager to get the word out now.

“Our country is at a serious crossroads,” says Gilliland. “We’ve gotten away from basic principles and, as a country, are in critical danger, economically and socially; we’re swiftly headed towards a steep cliff.”

“Justice for All” focuses on logic-based reasoning and common sense. For instance, in a state of freedom, people are free to make choices – good or bad – and those choices come with consequences – negative or positive. For people to truly be free, the government must let that play out without interference.

Broken down into chapters, 18 common-sense solutions to problems that are currently plaguing the country are proposed. Campaign finance reform, the economic recession, illegal immigration, government debt and healthcare reform are at the forefront. Other topics include, but are not limited to: global warming; public education; social security; and the state of the media.

Currently, the book is available on the author’s Web site as an e-book for $11.99; or in paperback format for $14.99. For more information and to view YouTube videos, visit: www.savingjustice.org .

Dr. Erin Gilliland, a physician who lives and works in northwest Missouri, grew up in Liberal, Kansas. He is tired of seeing Americans suffer at the hands of its government due to its abandonment of the founding principles of freedom, equality and justice for all.

He has traveled throughout Europe, including a trip to Greece in December 2008 when the Greek riots broke out resulting from the government debt crisis. He has witnessed what out-of-control government can do. More recently, he traveled to South Africa and has lived all over the United States.

As a society, Gilliland strongly believes that we fail to apply common sense values to fundamental concepts when it comes to constructing government and society. He says, “It’s the principles of freedom of the people, equality and justice for all that have benefited America and have made her strong and prosperous for the last 200 years.”