You are here: Home › 2011 Ocean Healing Strategy with Aztecs on New Year’s Dawn
By Roderick Kinnison on December 31, 2010 in All Stories Index, National News, NonProfit 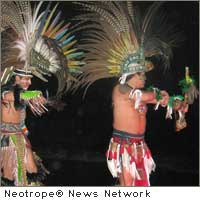 NAOTF has aligned with the U.N., Bolivian Mission, and Tribal Elders to use this “most powerful sacred day and time, to augment prayers to set intentions to lovingly heal our Mother Earth, especially Her oceans that give us joy, revitalization and food,” said Mazatl, the Azteca Elder host. The ’70 Something’ Elder who danced for Pope John-Paul II, and performs fire ceremonies on PV’s Pirate Ship, warmly invites everyone to come reconnect with Mother Earth’s heart, or celebrate Her with us wherever you are.

This officially launches the worldwide Elders-led ocean healing ceremonies leading up to U.N.’s International Mother Earth Day on April 22, 2011, initiated by the Bolivians. World tribes regularly perform ceremonies where the drums call in ancestral and Nature spirits to powerfully send love and appreciation to Mother Earth’s oceans, but given our world eco crisis, the Bolivians saw we need to work cross-culturally.

“We hope our whole Earth Family participates in these ceremonies that reconnect us with our ancient earth-honoring roots, to inspire communities to remember to give thanks to our Mother Earth and take green steps to live in more harmony with Nature daily,” said Bolivia’s Ambassador Loayza.

The Aztecs chose Bandaras Bay’s pier near where the whales perform their amazing mating dances, since these ceremonies raise the vibration of the water, to help purify, heal and restore our dying oceans, and its nutrients we have foolishly trashed with more plastic than plankton from the West Coast of the Americas, to Asia. Fish are eating microscopic carcinogenic plastic that snow down on them looking like plankton. That means whales and humans are eating plastic fish. An island of trash the size of Texas where no fish live, just invaded an Hawaiian Island.

Another grave concern, “The gray whales have developed the ‘skinny syndrome,’ and in November, instead of giving birth to 200 babies in Baja California’s Magdelena Bay, there were only 10, shared Ann Wycott, Snow Magazine writer, who had hoped to show her son the birthings.

“Our foundation quickly organized a Baby Whale Emergency Ceremony in the bay near Santa Barbara City College where the whales migrate between the Arctic Circle and Baja. While it was led by gifted Maori Whalerider Elder Grandmother Pauline and Apache Earth healer Valerie Nunez with Ingrid Schmidt’s college students, healing our oceans takes a Village,” said Chaffee.

Malenankayotl, Mazatl’s son-in-law, said, “Please ideally wear white and bring a white flower and candle.” He runs their Tamaskal/sweat lodge in Ixtapa, where Chaffee and English Shamen Gail Weatherly, prayed and asked for Mazatl’s guidance in creating this unifying event.

The magnificence of the Azteca, Mayan and Huichol cultures, is only surpassed by the attention that humanity is finally giving these wisdomkeepers, especially Mayan prophesies.

“Puerto Vallarta is a befitting locale to also honor the Aztecs for helping seed all this after teaching Rollingbears, a Lakota-Azteca, in Telluride Colorado, to ski with TelSki’s complimentary ticket, which inspired him to save their 1995 snowless Christmas. Witnessing three more emergency weather miracles made me realize Mother Earth really listens,” said Chaffee.