You are here: Home › Jacqueline Ibrahim is new CEO of Starlight Children’s Foundation
By Roderick Kinnison on November 15, 2010 in All Stories Index, National News, NonProfit 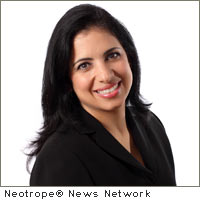 “The board considered many extraordinary candidates during the search for Starlight’s new CEO,” said Ron Leibow, Starlight board chair. “Jacqueline brings more than two decades of experience in the private sector and has earned a reputation as a respected leader. Equally important, she shares our passion for Starlight’s mission. Jacqueline is the right CEO to lead Starlight and grow the organization domestically and through our international affiliates around the world.”

“It is such an honor to join Starlight in its mission of improving the quality of life for children and teens with chronic and life-threatening illnesses and life-altering injuries,” said Ibrahim. “I am thrilled to be part of an organization that provides so many valuable programs to bring relief to families who need it most.”

A native of Carlsbad, CA, Ibrahim holds a bachelor’s degree in Political Science with an emphasis in international political economy from UC Berkeley. She further earned an MBA in global management and a doctorate in organizational leadership. Additionally, Ibrahim holds a Certificate in Fund Raising Management from Indiana University and a Certificate in Positive Business and Society Change from Case Western Reserve University.

When a child or teenager has a serious medical condition, everyone in the family is affected. For more than 25 years, Starlight Children’s Foundation(TM) has been dedicated to helping seriously ill children and their families cope with their pain, fear and isolation through entertainment, education and family activities. Starlight’s programs have been proven to distract children from their pain, help them better understand and manage their illnesses, and connect families facing similar challenges so that no one feels alone. Through a network of chapters and offices, Starlight provides ongoing support to children, parents and siblings in all U.S. states and Canadian provinces with an array of outpatient, hospital-based and Web offerings. Programs are also delivered internationally through affiliates in Australia, Japan and the United Kingdom.

The new long-term care tax deductible limit for 2011 may be as high as $4,240 for some applicants
Easeus Software announces New Updated Free 32-bit and 64-bit Partition Manager Software