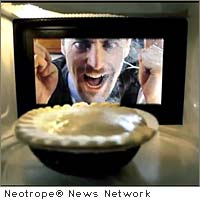 LOS ANGELES, Calif. (CitizenWire) — Epic Image Entertainment’s announced today that their mini-movie, “Epic Evil Laugh,” is participating in the Sprint EPIC Contest. Until Nov. 15, the public has the opportunity to vote once per day for Epic Evil Laugh at www.epicevillaugh.com .

The 10 mini-movies receiving the most votes will be named finalists with the winner of the Spring EPIC Contest named by Michael Bay, who directed many box-office hits including Transformers, Transformers: Revenge of the Fallen, Armageddon, Pearl Harbor, Iraq and Bad Boys I and II. The winner of the contest will receive $25,000.

In 2007 Lutsky was hand selected by Steven Spielberg as one of the top 24 filmmakers from more than 12,000 applicants to take part in Mark Burnett’s new reality television show On The Lot. He is currently developing the feature film, The Action Hero’s Guide to Saving Lives, based on his award-winning short film of the same name starring Patrick Warburton.

Epic Evil Laugh was produced by Keegan Wilcox, who was most recently recognized by Sir Ridley Scott as the winner of the Phillips Tell It Your Way competition for his short Porcelain Unicorn. The majority of the crew for the mini-movie are alumni of Chapman University Dodge College of Film and Media Arts.

The public has until Nov. 15, 2010 to vote once per day for Epic Evil Laugh at www.epicevillaugh.com .