You are here: Home › Bran-Rae sets the tone for audible electric vehicle sounds with EVtones
By Roderick Kinnison on October 6, 2010 in All Stories Index, Business, National News 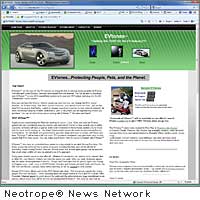 Revenues could also include public performance rights as the tunes will be broadcast over an EV’s outside, public sound system. There has been an alarming decline in music revenues over the last few years. EVtones™ could be a welcome and over time potentially significant addition to licensing revenue for the music industry and artists.

Young people and the will be a key target for EVtones™. The youth of today and the young at heart will likely be the first to embrace the use of electric vehicles as their primary mode of transportation. EVtones™ makes the EV fun as well as green. On EV marketing Nissan CEO Carlos Ghosn said, “We should say specifically ‘young people, first-new-car buyer.'”

Governments around the world are passing laws requiring electric and electric hybrid vehicles to emit sounds to protect the blind. EVtones™ have a special under tone audible to those with the most acute hearing such as the blind to distinguish these sounds coming from EVs. Evtones™ also have an embedded dog whistle sound to pre-alert seeing eye dogs and pets.

Millions of electric and electric hybrid vehicles will be added to roads worldwide. This could mean potentially tens of millions of MP3 music downloads and more money for music artists and record companies.

“While we don’t want Electric Vehicles to become noise polluters, EVtones will make electric vehicles sound compliant as well as making them fun for all. EVs don’t need to be loud they just need to sound cool,” says Bran-Rae founder Robert McDowell. “With the launch of EVtones, Bran-Rae is creating an entire new industry within the EV and music world. Bran-Rae is urging all electric vehicle manufacturers to make their tone/sound producing devices EVtones – MP3 compatible. EVtones will be to electric vehicles what iTunes is to MP3 players and ringtones are to cell phones.”

Bran-Rae is a green oriented development and marketing firm founded in 2008, focused on EV concepts and technologies that include EV solar and wind power. EVtones™ was the first concept from Bran-Rae and has had its beta site on the Web since mid-2008. Bran-Rae will also introduce www.EVVillage.com to help make people aware of the possibilities and benefits of the adoption and use of electric vehicles and new EV technologies, “It takes a village to raise awareness.”

Bran-Rae founder Robert McDowell also founded www.OperationChristmas.org supporting children of fallen American troops. McDowell produced “A lil Heroes Christmas” CD featuring Children of Fallen Troops recorded in studios across the nation. The CD made #8 on Billboard’s charts and OEC is currently working on OEC’s “precious heroes project,” a follow up to the previous CD. OperationChristmas.org sends the children gift cards during the holidays and offers a Disney Cruise as part of OEC’s VIP Vacation Program. McDowell has met the President at the White House, two Secretaries of Defense, numerous celebrities, sports stars and others promoting OperationChristmas.org.

McDowell, a former third generation oil industry employee said, “If we can reduce our dependence on foreign oil the U.S. may only have to fight for our National Security and not our Energy Security. This may mean OEC will have fewer ‘precious lil heroes’ to support in the future.”