You are here: Home › 3in4 Association is Highlighting the Critical Need to Plan for Extended Care with ‘Nearly 3 in 4 Need More Campaign’
By Roderick Kinnison on October 6, 2010 in All Stories Index, National News 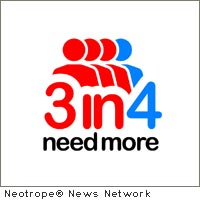 KIRKLAND, Wash. (CitizenWire) — Today the nonprofit 3in4 Association, established by thirteen long term care insurance leaders, announces the formation of an advisory board and executive committee for the “Nearly 3 in 4 Need More Campaign.” With this slogan, the group seeks to educate the public on:

* Information to support Americans’ plans for their potential need for long term care.

* The fact that healthcare reform (the CLASS Act) may not be enough by itself to help address the potential cost of long term care — public vs. private insurance.

* Financial implications of being uninsured or underinsured.

The campaign’s slogan was inspired by the U.S. Department of Health and Human Services which states that at least 70 percent (nearly 3 in 4) Americans over age 65 will require some long term care services at some point in their lives (http://www.longtermcare.gov).

The group also announces a national Web site today: www.3in4needmore.com . “We encourage everyone to visit for free information and opportunities to participate,” says Mark Goldberg, an Executive Committee member.

Goldberg stresses that the campaign is not just for agents, agencies and carriers, but for all. “Members of the campaign cross all industries, genders and ages,” he says. Goldberg is President of ACSIA Long Term Care, Inc., an LTC Global company.

The movement is nationwide and its organization is exclusively dedicated to promoting the importance of planning for long term care needs. “It’s run by an advisory board and consists of some of the nation’s most knowledgeable and committed professionals in the long term care industry.” High-profile ambassadors in sports, entertainment, politics, and various business sectors are being invited to help with outreach.

“The campaign is vitally needed,” says Executive Committee member Jonas Roeser, because, “a fraction of those who could benefit from long term care planning do it.” Roeser is Senior Vice President of Marketing & Operations, LTC Financial Partners, LLC.

Aware of the great and growing need for long term care services, Senator Ted Kennedy promoted a long term care public option, known as the CLASS Act, prior to his death. It’s now part of the new health reform law and is expected to become operational in 2013.

The “Nearly 3 in 4 Need More Campaign” will promote the public option as well as private insurance alternatives, and will aid people in choosing the plan that best fits their financial and health circumstances. “We just want to see all Americans protected, one way or another,” says Jonas Roeser.

The nonprofit 3in4 Association plans to operate as a 501(c)(4) corporation. More information online: www.3in4needmore.com .