You are here: Home › Domestic Violence Wage Protection Act Signed by Calif. Governor: Nava Bill Will Ensure that Victims Families are Protected
By Topher J. Zane on October 1, 2010 in All Stories Index, Government

SACRAMENTO, Calif. (CitizenWire – Local) — Assemblymember Pedro Nava announced today that his Assembly Bill 2364, the Domestic Violence Wage Protection Act, was signed by Governor Arnold Schwarzenegger. “The impacts of domestic violence can be physically, emotionally, and financially devastating. AB 2364 will provide some financial protection to victims of domestic violence and their families and California will now be eligible for $559 million in additional funds,” said Nava. 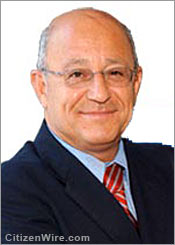 AB 2364 will bring California’s Unemployment Insurance Code into compliance with federal eligibility guidelines which stipulate when an individual may leave an employer due to domestic violence in their family and still be able to qualify for unemployment insurance benefits. Because this measure will conform California law to federal law, the state will be eligible to receive $559 million dollars under the American Recovery and Reinvestment Act.

According to the California Department of Justice, in 2009 there were more than 167,000 officially reported incidences of domestic violence. In California domestic violence is defined as “abuse committed against an adult or a fully emancipated minor who is a spouse, former spouse, cohabitant, former cohabitant, or person with whom the suspect has had a child or is having or has had a dating or engagement relationship.”

One of the main reasons victims stay with, or return to, their abusers is because they cannot afford to leave. AB 2364 will provide some support so that victims of domestic violence can escape their abusers.

Said Nava, “My bill will provide some financial stability to families. It is the least we can do to help them overcome this hardship.”

Musicians Steve Carlson and Darren Sher collaborate on song about the dreams of becoming a parent
Sinking Feeling? Illinois State Geological Survey can help determine if hone is at risk of mine subsidence