You are here: Home › US Senate Candidate Gail Goode Supports NYC Ban on Drilling Near Drinking Water
By Roderick Kinnison on August 25, 2010 in All Stories Index, National News, Politics 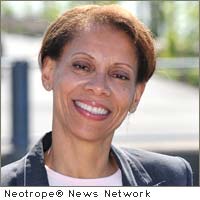 “We must have a much clearer sense of the potential impact of this process, known as hydraulic fracturing, on our watershed,” Goode said, following a community town hall meeting Tuesday at the Borough of Manhattan Community College.

“I support creating jobs, but in this case, we must consider the greater good of protecting the region’s drinking water,” said Goode, who will face off against Kirsten Gillibrand in the Sept. 14 Democratic Primary. “As we’ve seen with the Gulf of Mexico oil spill, it is just not enough for industry to assure the public that a process is safe.”

Hydraulic fracturing is used to release natural gas deposits by shooting a high-pressure mixture of water, sand and chemicals into shale deposits thousands of feet below ground. The mixture fractures the shale and allows gas that is trapped in the formations to flow.

Earlier this month, the New York State Senate passed a bill that suspends hydraulic fracturing for the extraction of natural gas or oil until May 15, 2011, and suspends the issuance of new permits for such drilling, to provide time to study the issue. If the legislation becomes law, it would temporarily prevent drilling in the Marcellus Shale formation, which stretches from the Catskills region westward across New York into Ohio, and south into Pennsylvania, New Jersey, West Virginia and Virginia.

Goode noted that the Senate legislation acknowledges the “robust debate involving the interplay between job creation and protection of the environment,” but said the potential risks in this case are too great until more is known.

“The federal government should be working hand-in-hand with state officials to create jobs, and I do not believe my opponent has done nearly enough to help the people of New York,” Goode said. “We should be focusing on rebuilding infrastructure and bringing new technologies to New York, rather than drilling processes that could potentially contaminate our drinking water.”

News Source for this Press Release: People For Gail Goode :: This news release was first issued by and is Copyright © 2010 the Neotrope® News Network – all rights reserved. Originally published on CitizenWire™.