You are here: Home › U.S. Urges Iran to Respect the Fundamental Freedoms of its Citizens
By Topher J. Zane on August 10, 2010 in All Stories Index, Government

WASHINGTON, D.C. (CitizenWire) — A statement today from Hillary Rodham Clinton, Secretary of State, reads: “The United States is deeply concerned that Iran continues to deny its citizens their civil rights and intimidate and detain those Iranians who seek to hold their government accountable and stand up for the rights of their fellow citizens.” 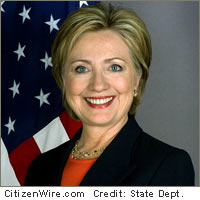 We remain troubled by the case of Sakineh Mohammadi Ashtiani, who garnered international attention for her verdict of death by stoning. While the Iranian Government later stated she would not face execution by stoning, her fate is unclear. We are also troubled by reports that Ebrahim Hamidi, an 18-year old charged with homosexuality, faces imminent execution despite the fact that he is currently without legal representation.

Neither case has proceeded with the transparency or due process enshrined in Iran’s own constitution, and their lawyer, Mohammad Mostafaei, felt that he had to flee Iran after he was questioned by authorities and his family members were detained.

We are also concerned about the fate of Iranians who are in danger of imminent execution for exercising their right to free expression after the June 2009 elections, including Jafar Kazemi, Mohammad Haj Aghaei, and Javad Lari. The United States urges the Iranian Government to halt these executions in accordance with its obligations to the International Covenant on Civil and Political Rights and calls for the immediate release of all political prisoners and imprisoned human rights defenders.

The United States will continue to stand with people around the world who seek to exercise their universal rights and speak out in defense of human liberties.