You are here: Home › According to Foreclosure Listings Nationwide, U.S. Home Foreclosures Dipped 5% in First Half of 2010
By Roderick Kinnison on August 10, 2010 in All Stories Index, National News, Real Estate 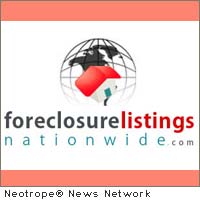 With a total of 1,654,630 properties entering some stage of the foreclosure process from January 1 to June 31, the mid-year statistics show a slowing trend over the first part of the year, and a year over year decrease of almost 7 percent from June of 2009. But experts warn buyers not to read into the statistics as the end of the foreclosure trend.

“We’re seeing a decline in foreclosure rates not because the market is repairing itself, but because banks are providing homeowners more time to pay off their debts before a foreclosure occurs in order to slow the trend,” remarks Jason Gallagher, a business analyst with Foreclosure Listings Nationwide. “This basically means we’re not seeing as many new foreclosure properties. But we are seeing many existing foreclosure properties moving out of the foreclosure limbo stage into repossession by banks.”

“There are a huge backlog of REO and bank owned homes right now, and banks are going to be eager to get them off their hands fast,” says Mr. Gallagher. “That means low prices for buyers and investors, especially in places like Nevada, California and Florida.”

Nevada still tops the nation with 1 in every 17 homes entering some stage of the foreclosure process during the first 6 months of 2010. Remarkably, this number is still down 6 percent from the same period of 2009. Arizona had the second highest rate, with 1 in 30 homes. Florida came in third with 1 in 32 homes. Other states with some of the highest foreclosure rates during this period were Utah, Michigan, Idaho and Colorado.

Among states with the highest foreclosure volume totals, California was the clear leader with over 344,750 foreclosure properties. Florida had 277,000, and Arizona was in third with roughly 91,500. Close behind were Illinois, Michigan, Georgia, Texas, Nevada and Ohio.

For more information on foreclosure investing and to browse listings for REO and other foreclosure properties, visit www.ForeclosureListingsNationwide.com .

News Source for this Press Release: Foreclosure Listings Nationwide :: This news release was first issued by and is Copyright © 2010 the Neotrope® News Network – all rights reserved. Originally published on CitizenWire™.

New test under clinical study detects multiple hereditary disorders in embryos along with errors caused by abnormal pairing of chromosomes
U.S. Urges Iran to Respect the Fundamental Freedoms of its Citizens