You are here: Home › John Scott G Song Gets Music Video from Golosio Publishing
By Topher J. Zane on May 30, 2010 in Music, National News 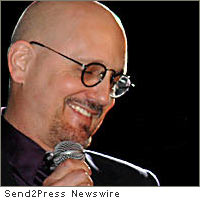 LOS ANGELES, Calif. (CitizenWire) — Helping songwriters in every way possible, Golosio Publishing (www.golosio.com) creates music videos for artists who have recorded songs from their catalog. The latest is a song by John Scott G called “Smokescreen,” and the video is now on both YouTube and FookMovie under the name “Smokescreen by JSG.”

“This song is a groove tune that is modern and retro at the same time,” states Golosio production manager Brian Forest. “The sound of ‘Smokescreen’ is like Beck meets Sandy Nelson, or like DJ Shadow crossed with Medeski, Martin & Wood. So, with all that glorious noise, we wanted the video to show a wide variety of wild and wonderful things.”

Incorporating images from several continents and many decades, the video features female dancers, vintage aircraft, whips, wild animals, travel destinations, statues, electronic devices, time-lapse photography, and an editing approach that blends the concepts of Eisenstein and the art movement known as Dada. “That’s a lot for a three-minute video and it’s an eye-popping and ‘anything goes’ approach,” notes Forest, “but the song is so bouncy that viewers are just carried along for the ride.”

Looking for a term that describes the energetic video, several people at Golosio have made suggestions like “Neo Psychedelia” and “Collage Montage.”

You can see the “Smokescreen” music video on YouTube: http://www.youtube.com/watch?v=7zUvCS7lIjw .

A member of the Board of the California Copyright Conference and director of Golosio Publishing, G began in music as The G-Man but is now recording under his own name while producing tracks for such artists as Scott Joss & Doug Colosio (country), Jonny Harmonic (electronic), and James Sotelo (rock). “Our goal is to see to it that every songwriter earns a living from their songs,” G says.

Golosio Music Publishing creates and licenses music for motion pictures, television, radio/TV commercials, and other formats. Music from Golosio has appeared in commercials for Verizon, Goodrich, Micron, Auto Club, and many others. This year, G, Joss and Colosio co-wrote “Bad Actor” on the latest Merle Haggard album.

News Source: Golosio Publishing :: This story was issued by Send2Press® and is Copyright © 2010 Neotrope® News Network – all rights reserved. Published on CitizenWire™ under license.