You are here: Home › Electronica Geek John Scott G goes Country with Merle, Gets Legit with the CCC, and Promotes the Artists of Golosio Publishing
By Roderick Kinnison on May 7, 2010 in Music, National News 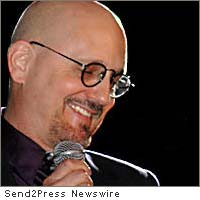 LOS ANGELES, Calif. (CitizenWire) — Many music publishing companies feature multiple genres but John Scott G of Golosio Publishing (www.golosio.com) is enjoying something unique: a song he co-wrote is on the new Merle Haggard album at the same time his groove-electronica songs are appearing on the new Jonny Harmonic album.

“I Am What I Am” (Vanguard Records) by Merle Haggard debuted at number 18 on the Billboard Country Albums chart with the song “Bad Actor” written by Merle Haggard, Doug Colosio, John Scott G, and Scott Joss. “Bad Actor” is garnering high praise from reviewers around the world.

Meanwhile, Jonny Harmonic is busy performing John Scott G’s compositions on the new album, “We All Love Bright Shiny Things,” available on iTunes. “The two styles of music on these albums could not be more different,” notes G, “but a compelling tune and emotional lyrics transcend any barriers of genre.”

Does he see any differences between the two artists? “Merle Haggard is a genius and one of the most important figures in modern song craft. Harmonic is a colleague but Haggard is an inspiration.”

This week, Mr. G was elected to the Board of the California Copyright Conference. Membership of the CCC includes music publishers, songwriters and attorneys, as well as representatives from PROs, motion pictures, television, multimedia, Internet, and record companies. “This is an organization dedicated to protecting intellectual property,” G states, “so being a part of it is an honor.”

Golosio Music Publishing creates and licenses music for motion pictures, television, radio/TV commercials, and other formats. Music from Golosio has appeared in commercials for Verizon, Goodrich, Micron, Auto Club, and many others. “I want to see our songwriters earn a living from their songs,” G says. “If that means contacting every music supervisor, creating music videos for every song, and releasing albums ourselves, as we have done with James Sotelo, Jonny Harmonic, and the new Scott Joss & Doug Colosio album, then those are my goals.”

News Source: Golosio Publishing :: This story was issued by Send2Press® and is Copyright © 2010 Neotrope® News Network – all rights reserved. Published on CitizenWire™ under license.