You are here: Home › New Book, ‘Tales of a Silver-Haired Volunteer’ Educates and Entertains
By Roderick Kinnison on June 10, 2016 in Entertainment 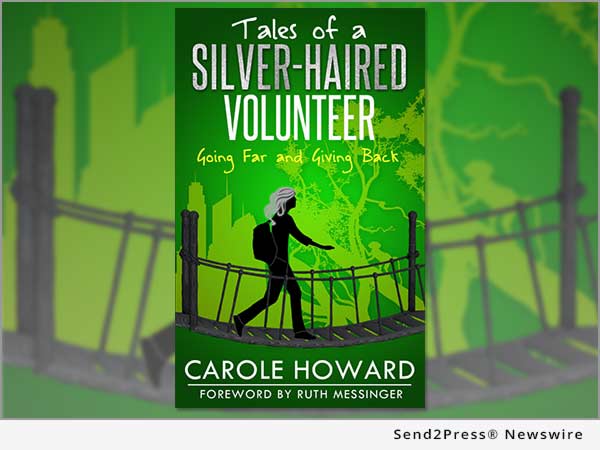 WARWICK, N.Y., Jun 10, 2016 (SEND2PRESS NEWSWIRE) — Leaving her comfort zone, having adventurous fun, and being useful are at the heart of Carole Howard’s new travel memoir, “Tales of a Silver-Haired Volunteer: Going Far and Giving Back”(ISBN: 978-1619844568). The book documents the author’s and her husband’s late-in-life volunteer travels to Africa and Asia. Some are funny. Some are serious. Many are both.

It all started over a meal of spaghetti with sloppy red sauce, wine, and discussions of mortality. Howard and her husband, Geoffrey, had always thought about joining the Peace Corps together some day since he’d been a volunteer many years ago. They just hadn’t realized “some day” had arrived. What now? They’d need to retire from their consulting business. Could they do it? They did.

“It made sense to travel after retirement. We’d done a lot of it and were good at it,” Howard says. “But most of our trips had been the regular 10-day to two-week kind – hiking, biking and touring different cities and countries. This would be different.”

They found that American Jewish World Service (AJWS) sought mid- and post-career professionals for volunteer assignments ranging from one month to one year. This was perfect. They applied and were accepted. What began as “let’s give it a shot,” turned into a series of life-changing adventures.

Published by Gatekeeper Press, each section of “Tales of a Silver-Haired Volunteer” consists of “verbal snapshots” of five very different assignments in five countries in the developing world: irrigated agriculture in Senegal, mountain gorilla health in Uganda, orphan care in Namibia, sex education in Thailand and AIDS prevention among sex workers in Ghana.

Howard’s unique perspective, combined with her sense of humor, provides insights into people and their cultures. It also provides insight into Howard’s self and subsequent evolution.

“Carole and Geoffrey accepted assignments, settled into whatever accommodations were available, and took on the challenges and satisfactions of living in a different culture, developing relationships with different people and bonding with them over the work to be done,” Ruth Messinger, the president of American Jewish World Service, says in the book’s foreword. “Wherever they went, they discovered that most important piece of learning – the extent to which people everywhere share values and personal stories that can bring us together instead of setting us apart.”

Howard says that she wrote this book not only to tell tales of the good, the hard, and the laughable, but also in hopes that it might inspire readers to think that they can do something similar.

“Whether it be for a week, a month, a year or in recurring increments over the years, these experiences will change the way readers see the world and themselves,” she adds.

A portion of book sales will be donated to AJWS.

Carole Howard lives with her husband in New York’s mid-Hudson Valley. A world traveler, she has been to more than 50 countries. She is the co-author of “The Great PARIS WalkPack,” a collection of self-guided walking tours of Paris, and the author of two novels, “About Face” and “Deadly Adagio.”

American Jewish World Service is the first and only Jewish organization dedicated solely to ending poverty and promoting human rights in the developing world. Through philanthropy and advocacy, they have addressed some of the gravest global problems of our time – genocide, AIDS, violence against women and girls, hatred of LGBT people and the horrific consequences of natural and human-made disasters.

This press release was issued on behalf of the news source, who is solely responsible for its accuracy, by Send2Press Newswire. To view the original story, visit: https://www.send2press.com/wire/new-book-tales-of-a-silver-haired-volunteer-educates-and-entertains/