You are here: Home › Almost 5 million borrowers are at least two months late on their mortgages, reports ForeclosureListings.com
By Roderick Kinnison on February 23, 2011 in All Stories Index, Internet, National News, Real Estate 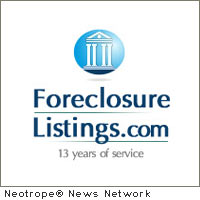 NEW YORK, N.Y. (CitizenWire) — ForeclosureListings.com reports data that shows alarming statistics about five states that had more foreclosures in them from 2010 to 2011 and the average price of a home in foreclosure. Struggling with job losses and loans worth more than their home’s value, almost 5 million borrowers are at least two months behind on their mortgages, and more are expected to miss payments.

Banks repossessed more than 1 million homes in 2010 and predictions are that lenders will repossess 1.2 million homes in 2011. Foreclosure filings last year exposed a record high of 2.9 million homes, or one in 45 U.S. households, despite government assistance programs to assist homeowners, and the government’s increased scrutiny of “robo-filings” which temporarily halted actions against borrowers who were critically behind on mortgage payments.

This temporary pause in the foreclosure trend was more a sign that lenders had become held up in reviewing procedures, formalities, resubmitting paperwork, and constructing legal arguments related to responses to accusations of improper foreclosure processing, than a sign of an enthusiastic housing recovery.

Most banks have since resumed their eviction processes, however, and the first quarter of 2011 is expected to reveal a rebound in foreclosure activity. As most professionals in the mortgage industry will state, once a trend, good or bad, is established, it takes a long time and/or something dramatic to reverse the trend. Low mortgage rates are unlikely to be enough by themselves to resurrect a housing market overwhelmed by declining housing prices, tighter credit standards, and high unemployment.

For example, the statistics for the top 5 states that had more foreclosures in February 2010 versus February 2011, and the average price of a home in foreclosure for that period are:

In 2010 Texas was listed in the top 5 states mainly because of its sheer size and number of people. The U.S. Bureau of the Census reported that Texas added nearly 4.3 million people in the previous ten years; more people than any other state.

In 2011, more than half of lost jobs during Texas’ shorter, or less painful, recession have already been recovered as the Texas economy recovers more quickly than the rest of the nation as a whole. Nationally, only 13.4 percent of recession-hit jobs had been recovered ending 2010, and recent reports are that many of these are government jobs.

Michigan continues to struggle with employment problems but the new governor is determined to turn that state’s situation around without the assistance of the federal government, by cutting expenses and state spending, and luring businesses to stay or to join the state as it improves the economic conditions for businesses.

The unfortunate foreclosure circumstances will likely be the most sensitive in states that have already been affected, including previous housing boom states Nevada, Arizona, Florida and California, in company with states that are suffering most from the economic decline, including Michigan and Illinois.

For the fourth straight year, Nevada posted the highest foreclosure rate in 2010 despite a 5 percent decline in activity from 2009. One in every 11 Nevada households received a foreclosure filing in 2010. In December, foreclosures amplified 18 percent from November with a 71 percent soar in bank repossessions.

Arizona and California also displayed sharp December increases in the number of homes banks repossessed, at 52 percent and 47 percent, correspondingly. Arizona, where one in every 17 Arizona households received a foreclosure filing last year finished the year at No. 2 for the highest rates of foreclosure. Florida, where one in 18 households received a notice was listed at No. 3 in the nation.