You are here: Home › LTCFP engaged Olympic legend Bruce Jenner to speak at the company’s annual meeting, held this year in Austin, Texas
By Roderick Kinnison on February 1, 2011 in All Stories Index, Business, National News, Videos 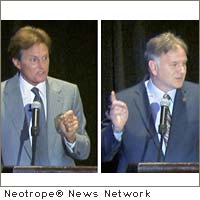 KIRKLAND, Wash. (CitizenWire) — LTC Financial Partners LLC (LTCFP), one of America’s largest and most experienced long-term care insurance agencies, is going for the gold. “Among agencies specializing in LTC, we’re already out in front,” says Cameron Truesdell, CEO, “and we’re determined to widen our lead.” To highlight this point, LTCFP engaged Olympic legend Bruce Jenner to speak at the company’s annual meeting, held this year in Austin, Texas, January 14-16.

Jenner, who won the Decathlon event in the 1976 Summer Olympics, “symbolizes the success we’re after,” says Truesdell. Like Jenner, who did best overall in 10 track and field events, “we’re leading our field in 10 key ways,” Truesdell claims.

1. Revenue Growth: For three years in a row (2008, 2009, and 2010), LTCFP has been selected by Inc. Magazine as one of the nation’s 5,000 fastest-growing companies. And among large national agencies specializing in LTC insurance sales, none is growing faster than LTCFP.

2. Dividend Growth: The payout per share has doubled in a single year. For LTCFP agents who are shareholders, dividends represent a significant income stream beyond commission and renewal income. One agent, Gene Cutler, will receive more than $70,000 in dividends this coming March, up from about $35,000 last year.

3. More Agents Qualifying for Partner Status: 48 were acknowledged as new Partners at the annual meeting, for a total of 155 agents who are now Partners. Partners receive company shares and dividend payments.

4. Personnel Growth: LTCFP has increased nearly 6-fold in the past six years, from about 90 in 2005 to well over 500 today (agents and support staff).

5. Lead Generation: The company currently invests several million dollars per year finding people who might be interested in long-term care insurance — boosting the productivity of agents.

7. Industry Support: LTCFP aids the growth of others in LTC insurance marketing. The company is a co-founder and sponsor of the “3 in 4 Need More” campaign, which seeks to multiply industry market penetration as much as 10-fold.

9. Service to Organizations: Long viewed as a consumer product, LTC insurance is increasingly being marketed as an employee or association-member benefit, thanks in part to LTCFP’s leadership. The company’s Long Term Care Outreach and Education Program (LTCOEP®) provides free briefings and education to organizations of all sizes, including associations with millions of members.

10. Service to Humanity: LTCFP earmarks 2% of its profits for development aid in Africa and Haiti.

“In the LTC-industry decathlon, we’re leading by a mile,” says Truesdell. “And we’re doing it by pretty much following the same principles Jenner followed in winning the Olympic decathlon.”

Jenner didn’t let self-doubt, injuries, or stiff competition stand in his way. “Your destiny is in your hands,” he said in his keynote, and “Your greatest competitor is you.”

“We think of ourselves as business athletes,” says Truesdell. “We set bold goals, we’re self-motivated, and we don’t let things like a weak economy faze us.” He foresees continued rapid growth in the years ahead; and LTCFP is currently seeking 450 new agents. More information is available at http://web.ltcfp.com/ltcfp/careercenter.aspx .