You are here: Home › Sandra Piller releases third album, ‘Days Like These’ on Shady Hill Records
By Roderick Kinnison on January 18, 2011 in All Stories Index, Entertainment, Music, National News, Videos 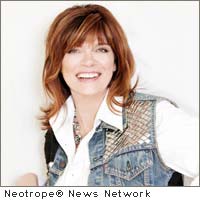 LOS ANGELES, Calif. (CitizenWire) — Sandra Piller’s third album, “Days Like These” (Shady Hill Records), is released today, and Sandra met with press, industry and fans in a special performance at The Mint in Hollywood. Making the week even more eventful, Sandra was just named Female Country Music Artist of the Year by New Music Weekly magazine.

The appearance in front of a standing-room-only crowd celebrated an album that has already received strong response to the title track, which is currently #5 on the New Music Weekly Top 30 Indie chart and #82 on the Music Row chart. The first single from the album, “I Cross That Bridge,” was #1 on the New Music Weekly charts for three weeks.

The album is full of songs with emotional resonance, often celebrating the simple joys of life as in these lines from the title song – “Sunday morning wake up early, Feel the sunshine on my face, Lazy day no need to hurry anywhere, Just keep my spirit in a state of grace.”

With radio airplay on country and Christian radio stations nationwide, YouTube videos and impassioned fan response, Sandra is fast becoming a name to reckon with in a business she entered only a few years ago. “I love almost everything about country music, from the stories and the emotion, to the musicians and the sound,” Sandra states, “and it’s such an honor to be working with some of the most-respected songwriters in the business.”

Songs on “Days Like These” were primarily written by Nashville veteran Jane Bach who has composed hits for Reba McEntire, Collin Raye, and Jo Dee Messina. The album was produced in Nashville by Bach with Executive Producer, legendary country music icon Cowboy Jack Clement.

Most of the tunes lift the spirit and touch the soul, while some are just good old fashioned dance numbers, which is creating a lot of kick-up-the-heels fun among Sandra’s loyal following of swing dancers in the Los Angeles area.

Sandra’s live show features a new band under the direction of Loren Gold, who has worked with Hilary Duff, Mandy Moore, Melissa Etheridge and tours for American Idol and Dancing with the Stars.