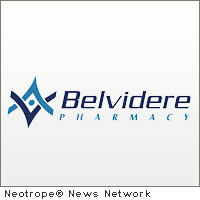 NORTH PLAINFIELD, N.J. (CitizenWire) — For the second time in its history, Belvidere Pharmacy of North Plainfield has secured the coveted Pharmacy Compounding Accreditation Board’s (PCAB) Seal of Accreditation. Registered in New York, New Jersey and Connecticut, Belvidere was the first and is still the only accredited PCAB pharmacy in the New York metro area. It has held this distinction since 2007.

“We are very proud to be reaccredited by PCAB,” said Shara Rudner, R.Ph., FIACP, FACA, FACVP, and president of Belvidere Pharmacy. “This accreditation demonstrates that we meet the highest quality and safety standards in our profession. It takes a daily, concerted effort by my entire staff, and we were thrilled to receive it again.”

Belvidere is exclusively a compounding pharmacy that serves both human and veterinary patients. A compounding pharmacy is one that creates or mixes medications for individual patients, for a variety of medical reasons. Compounded medications are prescriptions written by physicians, veterinarians or other legally authorized prescribers for their patients with special needs that cannot be met by mass-produced drugs.

Examples are many, and include:
– Creating medications for patients with allergies or low-tolerances for certain ingredients-such as gluten and sugar-that are used in mass-manufactured medications.
– Preparing medicines that a physician wants for his or her patient, but has been discontinued by a large pharmaceutical company for economic reasons.
– Mixing a smaller dose of a medication for a child, when that medication is only commercially available in adult doses.
– Crafting specific, but commercially unavailable, doses of medications for both human and animal patients.

Although these situations seem rare, they’re not. In fact, some 30 to 40 million compounded prescriptions are made every year. While many pharmacies practice a small degree of compounding, it is considered a specialty-one that has been an integral part of pharmacy practice for centuries. Compounding is regulated on the state level, but the national PCAB accreditation sets comprehensive and strict standards for pharmacies that earn its respected seal of approval.

That process is demanding, and includes completing an extensive application process, documenting written policies and providing an analysis of quality procedures – all of which are reviewed by PCAB and leaders in the field. Following the paperwork comes an onsite inspection lead by compounding experts. Belvidere completed all requirements for its reaccreditation, granting it the continued right to say that it is a “PCAB accredited(TM) compounding pharmacy.”

Rudner explained that her pharmacy serves a broad spectrum of practitioners and their patients from a wide geographic area, all of whom rely on her and her staff for these specially made medicines. For Rudner, the PCAB accreditation is her way of guaranteeing her clientele that they’re working with the best in the industry.

“We simply wouldn’t have it any other way,” said Rudner.

Belvidere Pharmacy has served its community since 1959. Shara Rudner – a fellow of the International Academy of Compounding Pharmacists, a fellow and regional director of the American College of Apothecaries, a fellow of the American College of Veterinary Pharmacists and secretary of the New Jersey Academy of Compounding Pharmacists – has been owner and president of Belvidere since 1996. Under her leadership, Belvidere became an exclusive compounding pharmacy more than a decade ago. To learn more about Belvidere Pharmacy visit www.belviderepharmacy.com .

World’s Only Database of IRS Employee Ratings: The IRS Doghouse
Economic Gateway is an innovative Web system for retaining and attracting business and industry to its area