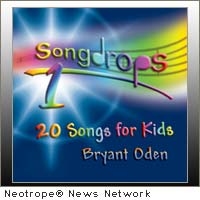 DENVER, Colo. (CitizenWire) — Songdrops Music has announced it will be offering all teachers free downloads of all three Bryant Oden CDs, from November 15th through December 1st 2010, through http://Songdrops.com .

If you haven’t yet heard a Bryant Oden children’s song, there’s a fair chance you will soon. His viral hit “The Duck Song” has over 20 million YouTube views, has done well on the iTunes Children’s Music charts, and is now a push-to-play children’s book with CD (from Flinders Press, available through Amazon.com). In total, Bryant Oden’s kids’ songs are quickly approaching 50 million YouTube views.

Before Songdrops, Oden started the humor site http://InnocentEnglish.com – a popular destination for funny English mistakes, jokes, and cute animal pictures – which gets around a million visitors a month. After years of prodding from friends and family, he decided to record a few children’s songs two years ago. “I had no idea then that I was stumbling into a new career, but two years and 75 songs later, I guess I have.”

Most surprising to Oden about the growing popularity of Songdrops is how many older kids and adults appreciate the songs. “I really wasn’t expecting middle school and high school kids, even college kids, to think the songs are funny,” he said. “Every day we put a fan video up on Songdrops.com, and at least half of the kids singing and acting out the songs are teenagers.”

Oden gives teachers much of the credit for the viral growth of his children’s music. “Without teachers playing some of my songs now and then for a little comic relief in the classroom, things would probably be growing a lot more slowly.” To show his appreciation, Oden is offering all teachers free downloads of all three of his children’s music CDs.

“I know how limited school budgets are, and how teachers often have to choose between going without a resource or paying for it themselves. This seemed like a fun little way to say ‘Thank you,'” Oden said.

The free song downloads are available to all teachers, from November 15th to December 1st 2010, through http://songdrops.com/teachers . They include all the songs from all three of Oden’s CDs: “Songdrops 1: 20 Songs for Kids,” “Songdrops 2: 20 More Songs,” and “Songdrops 3: 20 More Songs.” All three albums are being released this month through Songdrops Music and are available through CDbaby.com and through online retailers such as iTunes.