You are here: Home › The Turtle Survival Alliance saves 50 Yellow-Headed Temple Turtles from an illegal wildlife shipment in Hong Kong
By Roderick Kinnison on November 2, 2010 in All Stories Index, National News, NonProfit, Videos 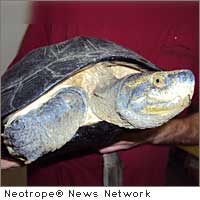 JACKSONVILLE, Fla. (CitizenWire) — The Turtle Survival Alliance announced that fifty Yellow-Headed Temple Turtles have arrived in Florida to begin a new life after being rescued from an illegal wildlife shipment in Hong Kong.

Had the turtles been successfully smuggled into China, they would have been killed to satisfy the large demand for turtle meat and turtle parts used in Chinese medicine.

It is not known where the turtles were originally captured by poachers. Because of concerns about genetics and disease transfer, they could not be released into another habitat. Hong Kong’s Kadoorie Farm and Botanic Garden provided temporary housing, but no permanent facilities were available. The turtles were stranded with no place to go.

It was then that the Fort Worth, Texas-based Turtle Survival Alliance (TSA) went into action, determined to find a home for the endangered turtles. An appeal to TSA members quickly raised funds for a turtle airlift to the USA, and facilities to house the turtles were located in Florida.

“It doesn’t sound like much of a challenge to house fifty turtles, but you have to remember that this species can reach two feet long and weigh more than 35 pounds,” said Rick Hudson, conservation biologist and TSA President. “They need large outdoor ponds with clean water and warm temperatures year-round.”

Transporting the turtles over 8,000 miles threatened to be cost-prohibitive, but at the final hour, Taiwan-based EVA airlines generously offered to move the animals at a discounted fare. The turtles were boxed in 20 temperature-controlled containers and loaded onto a cargo jet.

Upon arrival at Atlanta International Airport, the turtles were met by Cris Hagen, Director of Animal Management for the Turtle Survival Alliance.

The turtles were transported to the Jacksonville Zoo, where they were unpacked and assessed after their long trip. From there, they were taken to their new Florida home, an immense pond on private property. The turtles will form the core of a breeding colony to help assure the species’ survival.

“We should start seeing some reproduction in the next year or two, after they have acclimated and settled into their new south Florida home,” Hagen said.

Thanks to the generosity of its members and EVA Airlines, the TSA has created a Turtle Transport Fund for similar emergencies in the future. “If we want to save these amazing creatures, we have to be able to move fast,” Hudson said.

About the Turtle Survival Alliance:

The Turtle Survival Alliance’s mission is to conserve tortoises and turtles through a global network of species recovery efforts and captive breeding programs. More information can be found at www.turtlesurvival.org .