You are here: Home › First Evidence, a solo, contemporary circus show created by Shayna Swanson, founder and artistic director of Aloft, to deput in December
By Roderick Kinnison on October 28, 2010 in All Stories Index, Entertainment, National News, Videos 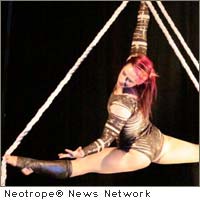 Utilizing 2,000 marbles, a ream of paper, a skinny rope, one freethinking wheel, precarious strips of cloth, a slingshot, spinning pole, a change of clothes, every available muscle and 15 years of journal entries, Swanson weaves together a stunning show filled with surprises and revelations.

Simple props and a deceivingly minimal stage highlight Swanson’s signature power and intensity as she magnifies life’s fleeting and defining moments – how grand possibilities can slip away and the subsequent regret felt when they are gone.

The show was inspired by the artist’s questioning: Did the time invested pay off or just hold me back? What happens if trying never gets me anywhere? Why does practicing saying, “Everything is fine,” not make everything fine?

The show begins with a lie and hurtles towards honesty with alternating restraint and release as Swanson climbs, spins and claws her way towards resolution.

During the last five years, Swanson has created four full-length shows for Aloft, including the critically-acclaimed, “Rolling Blackouts” and “Dinner of Our Discontent.” For the last two years, she has produced the monthly circus cabaret, “El Circo Cheapo Cabaret,” which presented some of the best circus acts in the U.S. in a straightforward and unpretentious environment. The show hit the road in 2009 for a successful nationwide tour.

In “First Evidence,” Swanson turns her focus inward, revitalizing hibernating skills and pushing herself towards a more personal form of storytelling through contemporary circus. She culls back into her past as a visual artist, musician, dancer and spoken-word artist to discover the moments when she turned her attention away from those skills to become a circus performer. She searches for what was lost when she left them behind.

For more than 14 years, Swanson has created and performed aerial works that have been described by the Chicago Reader as, “Truly heartfelt and creative.” After studying dance at Columbia College Chicago and graduating with a degree in sociology from Portland State University, she decided her true place was in the air. She attended Circus Maniacs Circus School in England and studied aerial hoop, trapeze, rope, tumbling and stilts. Since her return to the U.S., she has been performing and teaching with The Midnight Circus, Circus Smirkus, Cirque de la Mer, Zyngara, New Vision Cirque, Circesteem, The Lyric Opera, Cirque Voila and many corporate clients.

In 2005, she received the Glenn P. Davis Scholarship to the Aerial Dance Festival, awarded every year for excellence in aerial choreography. That same year, Swanson formed “Aloft Aerial Dance” and, with a CAAP grant from the City of Chicago, produced “Rolling Blackouts.” In 2006, her choreography was selected into the repertory of Thodos Dance Chicago and featured in the Best of Dance Chicago Showcase. That same year she was named a “Mover and Shaker” of the Chicago dance scene. Her work was also presented at the International Circus Performer’s Gathering in Brattleboro, Vermont, and at many Chicago dance festivals.

Swanson formed the Aloft Loft in April 2006 to provide a supportive and vibrant community training space for all types of physical artists. She was also honored to perform at the International Clown Festival in Shanghai, China and as a part of Hong Kong’s Olympic festivities. In 2009, she was a featured act at Pegasus Variete in Germany and for the last two years, at the Moisture Festival of Comedy and Variety in Seattle.

Press comps: By request.
Rehearsal viewings can be arranged; no preview will be available.
Photos and video available by request.