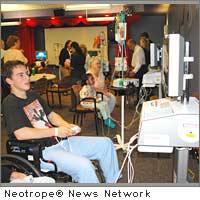 “When a child is hospitalized, the day-to-day joys of childhood take a back seat to medical treatments, and Fun Centers return some of that joy to children in the hospital,” said Susan Atkinson, President of Stater Bros. Charities. “We’re excited to join Nestle, CPK frozen pizza and Starlight in presenting these new Fun Centers to Loma Linda University Children’s Hospital.”

“Nestle is proud to support Starlight and its dedication to helping seriously ill children and their families cope with the challenges that accompany prolonged childhood illness,” said Charles Zimmerman, Customer Development Director for Nestle. “Starlight’s programs ease the burden on seriously ill children and their families and help them to better deal with, understand and manage their illnesses. With the support of Stater Bros. and California Pizza Kitchen frozen pizza, we hope this Fun Center unveiling will bring smiles to the children at Loma Linda University Children’s Hospital.”

For more information on Nestle’s partnership with Starlight, visit www.starlight.org/nestle .

When a child or teenager has a serious medical condition, everyone in the family is affected. For more than 25 years, Starlight Children’s Foundation has been dedicated to helping seriously ill children and their families cope with their pain, fear and isolation through entertainment, education and family activities. Starlight’s programs have been proven to distract children from their pain, help them better understand and manage their illnesses, and connect families facing similar challenges so that no one feels alone.

Through a network of chapters and offices, Starlight provides ongoing support to children, parents and siblings in all U.S. states and Canadian provinces with an array of outpatient, hospital-based and Web offerings. Programs are also delivered internationally through affiliates in Australia, Japan and the United Kingdom.