You are here: Home › Home Remodeling Projects Shrink as Homeowners Worry; But News Is Not All Bad, reports RemodelorMove.com
By Roderick Kinnison on October 13, 2010 in All Stories Index, National News, Real Estate 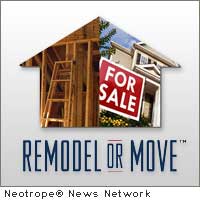 SUNNYVALE, Calif. (CitizenWire) — A recent report released by Remodelormove.com revealed that homeowners continue to scale back on remodeling projects in response to concern over the economy. “We release these industry reports every six months based on a survey of 5,000 homeowners who are considering changing their home – either remodeling or moving,” says Dan Fritschen, founder of www.remodelormove.com .

The fall 2010 U.S. Remodeling Sentiment Report shows that after a year of steady remodeling declines in 2009, the interest in remodeling stabilized in 2010. However, the size and scope of the remodeling projects are much smaller when compared to 2007/2008.

For instance, small bathroom additions are the most popular.

Beyond the bathroom, additional signs point to changes in the home improvement industry. They include:

* Home equity increases in 2006 and 2007 encouraged spending, but now as equity shrinks, homeowners are scaling down their projects.

So, what appears to be the biggest concern? According to the report, 85 percent of respondents said the cost to remodel. However, the news is not all bad. While the scale and number of remodels is down, the interest from homeowners who are in a position to remodel is strong and their taste for higher-end designs and expensive materials remains.

A detailed report is available at: http://www.remodelormove.com/shopping/view_product.cfm?pID=42 .

Additional information can be found at: http://www.remodelormove.com/survey_reports.cfm .