You are here: Home › Convert NTFS to FAT32 Partitions without Losing Data
By Roderick Kinnison on October 7, 2010 in All Stories Index, Computing, National News 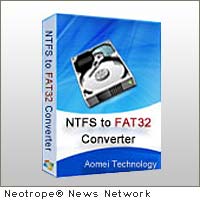 NEW YORK CITY, N.Y. (CitizenWire) — NTFS to FAT32 Converter, the most professional and reliable tool for converting a file system, has been released by Aomei Technology. Its prominent advantage in an operation – convert NTFS to FAT32 on the condition that the data security is ensured.

It is easy to convert FAT32 to NTFS by use of the built-in disk tool in Microsoft Windows. Conversely, conversion from NTFS to FAT32 is not an easy job. Fortunately, Aomei’s NTFS to FAT32 Converter can help the user to solve this troublesome problem through step-by-step operations.

For satisfying user requirements in all kinds of situations, Aomei Technology specifically designs three diverse editions of the product: NTFS to FAT32 Converter Personal Edition targets common users with Windows 7, Vista, XP, and 2000 (32bit) as their working environment. In order to provide a better service scope, the Business Edition has all functions of the Personal Edition but is mainly used for the advanced user or professional administrator on the operating systems of Windows Server 2000, 2003, and Server 2008 (both 32bit and 64bit).

The premium NTFS to FAT32 Converter Unlimited Edition can be licensed on multiple computers belonging to the IT service institution or enterprise. After using it, you will find that it really can save effort and valuable time. For more information, please visit the following link:
http://www.aomeitech.com/n2f/ntfs-to-fat32-converter-personal.html .

This company has been devoted to computer software and hardware research and IT services. Aomei Technology focuses on disk utility and partition manager software development and it is a worldwide provider in this industry. Web site: http://www.aomeitech.com .