You are here: Home › New Ferret Research is Released from Sacramento State University
By Topher J. Zane on September 21, 2010 in All Stories Index, National News, Politics 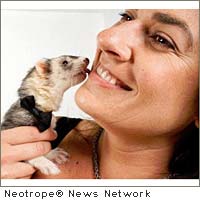 LA MESA, Calif. (CitizenWire) — A press conference has been announced for Noon on Saturday, Sept. 25th by LegalizeFerrets, calling on Governor Schwarzenegger to lift the ferret ban before he leaves office and asking (again) the respective Jerry Brown and Meg Whitman campaigns to address the issue.

About 100 California ferret enthusiasts are meeting at the Holiday Inn in Concord right after a new research study has been released by Sacramento State University on the issue of ferret legalization in California. The gathering is known as “Legalize Ferrets Revival” organized by legalizeferrets.org.

This research – posted on-line at http://ferretsanon.com/EIR/Final_Report.pdf was recommended by our consultant as necessary for a successful outcome to a future Environmental Impact Report and has taken a year to complete. The next step is for the California Fish and Game Commission to file a notice of preparation and seek bids on the EIR.

Both the California Fish and Game Commission and Governor Schwarzenegger have called for an Environmental Impact Report before they would consider ferret legalization in California, one of two states to ban them (Hawaii being the other).

California ferret lovers are hoping Governor Schwarzenegger will fulfill his campaign promise and legalize ferrets before he leaves office. While running for Governor the first time he told multiple ferret enthusiasts he would sign any ferret bill that came to his desk but sadly he vetoed a ferret amnesty bill in September 2004. We’d like to offer him a chance to make good on his earlier campaign promise.

The new research outlines what we already know:

California does not appear to meet the requirements needed for establishment of feral populations of ferrets partly due to the presence of much more effective predators already.

41 States and 2 Provinces responded that it was not considered important to assess the status of domesticated ferrets in the wild. Why is that? Because they aren’t there.

Ferrets are domesticated and should not be banned or regulated by a wildlife agency. They are being held to a standard no other domesticated animal meets. The effort to legalize ferrets in California has gone on long enough. We know ferrets are already in the state in large numbers and none of the negative effects have happened – which means the best environmental study on ferrets has already been done – and they passed with flying colors.

The event also will include filming for a documentary by Todd Dayton of Fallout Pictures. His documentary should add the human and ferret faces necessary to complete the picture after the dry and non-personal research from Sac State Univ.

News Source for this Press Release: LegalizeFerrets :: This news release was first issued by and is Copyright © 2010 the Neotrope® News Network – all rights reserved. Originally published on CitizenWire™.