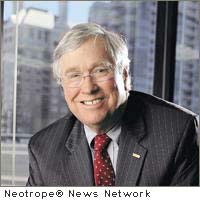 ATLANTA, Ga. (CitizenWire) — Political and economic uncertainty are hampering small businesses in Georgia, says Patrick Gartland, a former official of the U.S. Chamber of Commerce and the Small Business Administration, who will speak on Sept. 28 to the Georgia Association of Business Brokers.

“Main Street is reluctant to create jobs until the economy is turned around,” said Gartland, who played football under legendary Alabama coach Paul “Bear” Bryant and was a teammate of quarterback Joe Namath.

Uncertainty is the biggest challenge facing the state’s small businesses, many of which are “hunkered down” and unwilling to take any risk, says Gartland, the former vice president of the Small Business Growth Council of Metro Atlanta Chamber of Commerce. Health care reform, potential tax increases, regulatory issues, tighter loan markets and access to capital are all hurdles for small business operators.

Gartland will describe his efforts to help the state’s small businesses at the Sept. 28, 2010 meeting of the GABB, the state’s only professional organization and Multiple Listing Service dedicated to buying and selling businesses and franchises. The meeting is free and open to the public, and will be held at the South Terraces Conference Center, 115 Perimeter Center Place, Atlanta, GA, 30346. Networking begins at 9:45 a.m. with a free light breakfast before the group’s 10:30 a.m. meeting.

“Many experts believe that small businesses are job creators right now, Gartland says, so helping them prosper is economically vital. Small businesses must either find more U.S. customers or sell goods and services in foreign markets, a strategy made possible by the Internet,” Gartland said.

“We’ve just got to get the economy around,” said Gartland. “We’re going to come out of this thing. In the meantime, we’ve got to help these small businesses to be ready so that as economy starts to turn around, they can get back into the market.”

An experienced GABB business broker can help a buyer find businesses for sale, negotiate a fair price and obtain financing. A broker can help an owner evaluate and price a business, market and advertise to prospective buyers, negotiate and close a deal. The GABB Web site (www.gabb.org) lists hundreds of businesses for sale throughout Georgia, as well as around the country.

Patrick Gartland, 66, is a native of Cleveland and grew up in Myrtle Beach, S.C. He earned a Bachelor of Science in industrial management from the University of Alabama, which he attended on a football scholarship, played for legendary coach Paul “Bear” Bryant and was a teammate of quarterback Joe Namath. A Vietnam veteran, Mr. Gartland served in the U.S. Army from 1968 to 1979, and commanded the largest company in the 101st Airborne Division. He was awarded the Bronze Star and Joint Services medals. Mr. Gartland spent three decades working for the U.S. Chamber of Commerce, serving as regional public affairs officer in Atlanta and Washington, D.C., and as southeast regional advocate for the Small Business Administration’s Office of Advocacy. He ran the Christian Coalition of Georgia in the mid-1990s, and was the national director of the Center for Reclaiming America in Fort Lauderdale, Fla. He and his wife Kay have two daughters, Lavin and Katie, a son, Timothy, and three grandchildren. His hobbies include collecting political memorabilia and working out.

News Source for this Press Release: Georgia Association of Business Brokers :: This news release was first issued by and is Copyright © 2010 the Neotrope® News Network – all rights reserved. Originally published on CitizenWire™.