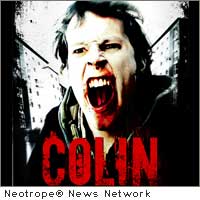 BEVERLY HILLS, Calif. (CitizenWire) — Walking Shadows LLC announces that the surprise hit of the Cannes Film Festival, “COLIN,” a British zombie movie, which cost just $75 (GBP 45) to make, will make its North American Premiere at the 13th Floor Haunted House in San Antonio, Texas on Thursday, September 23, 2010 – before moving to theaters nationwide in September and October.

“COLIN” is a new take on the traditional zombie film genre, telling the tale through the eyes of the zombie, played by 29-year-old Alastair Kirton.

Filmmaker Marc Price made headlines around the world when his DIY movie gained critical acclaim for being a fresh voice in a well-worn genre and was hailed as “redefining no-budget film-making.”

Price is thrilled that U.S. audiences will now get to see his movie, after news of the film was featured on U.S. television networks including CNN, ABC, and CBS – before finding a U.S. distributor.

Price made COLIN for around $75 in cash – spent mostly on a crowbar – and tea and cookies for the zombies. He relied on friends and Facebook to cast his legion of undead extras. It took over 18 months and buckets of determination for Price to make the movie on a 10-year-old camcorder that broke during the shoot.

“If our film does anything, hopefully it will make some 14-year old who wishes to make a movie, say ‘Oh, it’s entirely possible, because my mobile phone has a better resolution than this guy’s camcorder.’ I am excited by the idea of people watching my cheap little film and thinking ‘If this guy can do it, then so can I.'”

As of this announcement, COLIN has also been booked for the following play dates:

About the 13th Floor Haunted House in San Antonio, Texas:

13th Floor Haunted House is San Antonio’s newest and largest haunted house attraction. A first in the haunted attraction industry, the 13th Floor is a joint collaboration between two nationally recognized haunted house producers, and members of America Haunts, whose productions are regarded as some of America’s best haunted houses, including the House of Torment in Austin, Texas and The 13th Floor and Asylum in Denver, Colorado. Info: http://www.13thfloorsanantonio.com .

America Haunts is a collective of the most successful and renowned haunted houses and attractions in the country, serving over one million horror fans annually. Visitors to these events experience Hollywood quality special effects, seasonsed actors, astounding detail, lots of scares, and tons of fun! Info: http://www.americahaunts.com .

Walking Shadows LLC is a Beverly Hills-based independent entertainment company. Some of its recent releases include THE NATURE OF EXISTENCE (currently in theaters) and THE GOTHIC HORROR COLLECTION, double features of classic horror films with excellent quality and value pricing. Info: http://www.walking-shadows.com .

News Source for this Press Release: Walking Shadows LLC :: This news release was first issued by and is Copyright © 2010 the Neotrope® News Network – all rights reserved. Originally published on CitizenWire™.