You are here: Home › Opinion: A new finance structure for West Africa is proposed by WFAO’s Henry Oliver Ford
By Roderick Kinnison on September 7, 2010 in All Stories Index, National News, Opinion 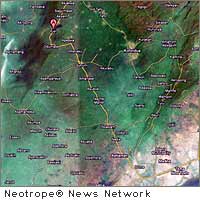 MIAMI, Fla. (CitizenWire) — Mr. Henry Oliver Ford of WFAO announces a new finance structure for West Africa. This new plan for structured finance is to help the socio-economic infrastructure. The plan that Mr. Ford has developed encompasses agriculture development, employee wage generation, Government tax base creation and the use of in-ground assets as a hedge to collateralize development. Henry Oliver is a well organized person that has practiced investment banking for years. Mr. Henry Oliver ford is well known throughout the world of international banking.

Mr. Ford has a practical train of thought that allows him to use derivatives and synthetic structures for basic and sustainable business growth. Mr. Ford’s philosophy revolves around the need for investment safety. He often says, “Why take a chance if you don’t have to?” This philosophy is something that Henry holds very high. Unfortunately many of his past colleagues did not share the same philosophies and thus suffered great individual and collective losses in the recent economic down turn that has left many countries poverty stricken.

The Finance structure that Mr. Henry Oliver Ford has used has been a myriad of ideas and concepts that have melded into one sound business model. This model is a form of Social Engineering that has its roots in the foundation of America. Henry is a strong proponent in self-produce. The only belief Mr. Ford has that he advocates more passionately than “self-production” is individual control of your “self-production.” Today’s global trade policy is fiercely competitive.

Countries that comprise the members of NAFTA must continually promote innovation in technology and stifle unwanted deterrents that promote non-productivity if they want to continue to remain viable.

“Our economy is now global and any pretext of one country monopolizing the flow of trade is preposterous,” says Mr. Ford, “The playing field is now even and no one country will be permitted to ‘run the show.'”

Africa’s leaders agree whole heartedly with Mr. Ford. Henry Oliver’s business model has stimulated billions in developmental funds for countries. However, Mr. Ford is a prudent financer. He elects to do business with countries that have a balanced political climate that is managed by leaders that have “the heart of a steward.” The responsibility of handling money is the responsibility of handling lives. With each monetary note that transfers from country to country a portion of a person’s life is also transferred.

People in some societies are viewed as disposable depending on their social cost and financial standing in their community. These people’s lives are considered worthless to some. However; Mr. Ford disagrees with this whole heartedly. He feels that any human life is more important than any financial gain. Humankind is perpetual, currencies come and go. Some leaders have either forgotten that or they never really knew or understood it.

Henry Oliver Ford is a man that has learned that lesson overtime and has never forgotten the importance of properly handling finance. To contact Mr. Henry Oliver Ford or any of his team members, please contact World Food Association Organization / World Food Ghana Ltd at 561-515-6015 or please visit the Web site at http://www.wfao.us .

News Source for this Press Release: World Food Association Organization S.A. Inc. :: This news release was first issued by and is Copyright © 2010 the Neotrope® News Network – all rights reserved. Originally published on CitizenWire™.