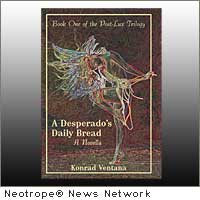 The reclusive author of this postmodern, post-perspicuous literature is a prominent scientist, professor, inventor, and visionary whose pioneering work in molecular biotechnology served to usher targeted genetic medicine across the threshold of history-his intellectual accomplishments are, in a word, profound. The first editions of this series of books received both Editor’s Choice and Rising Star designations from the publishers.

Konrad Ventana (literally, “Bold Counsel through a Window”) embraces the time-honored ideals of social responsibility (where poets, playwrights, and artists once served as guiding lights) for a modern society that “walks and runs for the cure” yet, in actuality, has been lulled into a state of non-participation in the life-of-the-mind and acts of meaningful creativity.

In each new book of The Post-Lux Trilogy, the author presents a vital and important aspect of the creative process, as it is boldly captured and elegantly revealed through the artistry of literary fiction.

Each remarkable book is a picture window: (1) A Desperado’s Daily Bread reveals the alienation of the true visionary in a society that honors the robes of authority, yet not the swink and pluck of the creative artist. (2) The Unbearable Sadness of Zilch chronicles the loss of divine inspiration and the role of the muse in an unforgettable and provocative Hollywood neo-Noir. (3) Questing for Uberjoy sweeps the reader off into a world of high drama and adventure in the remote Himalayan mountains of Nepal and Tibet, where lofty ideals clash with the myth of the conquering hero until nothing, not even the evening stars, will ever appear to be quite the same. This final volume is scheduled for 2011.

A Desperado’s Daily Bread & The Unbearable Sadness of Zilch are available from: www.iUniverse.com, www.bn.com, and www.amazon.com .

News Source for this Press Release: Konrad Ventana :: This news release was first issued by and is Copyright © 2010 the Neotrope® News Network – all rights reserved. Originally published on CitizenWire™.