You are here: Home › Music video from Jonny Harmonic gets surreal with 50s pinups, fireworks in ‘Explosive Chill’
By Roderick Kinnison on August 13, 2010 in All Stories Index, Music, National News, Videos 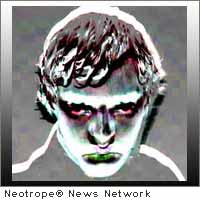 Produced by the FookMovie Collective, the purpose of the video is to show how the groove-oriented dance music can be a soundtrack to a wide variety of visual material.

The wide variety of imagery perfectly suits the eerie and pulsating music on “We All Love Bright Shiny Things.” Each of the album’s dozen tracks had its start in various locations, including “nightclubs, sexual conquests, drug trips, supernatural manifestations, slow-motion footage, girls in short skirts, and/or special effects,” G stated.

“These 12 songs began in a brightly-colored place full of movement and strange other-worldly creatures,” G noted. “From there, Jonny took them into a kind of ethereal plane involving rock, goth, dance, hearts-of-space, and groove,” G added.

Golosio is welcoming suggestions on the best way to categorize the sounds on the Jonny Harmonic album. “There were a lot of ideas from musicians in the studio,” says G, “including terms such as ambient bop, dark-groove, and industrial-lounge, but most of us like the term Explosive Chill, which also happens to be one of the song titles.”

Some say Jonny Harmonic (www.jonnyharmonic.com) is a phantom, while others say he’s trying to out-do Buckethead, the super-shredder guitarist who never appears in public without a mask and bucket for a hat. In either case, Jonny is not posing for publicity photos and not giving in-person interviews. When asked for a bio, he wrote: “Mr. Harmonic has no comment on rumors linking him to Shania Twain and George Chuvalo.”

In addition to producing and composing the songs on the “We All Love Bright Shiny Things” album, Mr. G began as electronica artist The G-Man and is now the managing partner of Golosio Publishing. Recently, he co-wrote the song “Bad Actor” on the new Merle Haggard album (“I Am What I Am” on Vanguard Records).

News Source for this Press Release: Golosio Publishing :: This news release was first issued by and is Copyright © 2010 the Neotrope® News Network – all rights reserved. Originally published on CitizenWire™.