You are here: Home › ChildWatch Tour: A Community Model to Emulate
By Liisa Sullivan on July 30, 2010 in All Stories Index

CitizenWire COLUMN: The city of Asheville, North Carolina, for 14 years running, produces what is called a ChildWatch Tour. This year’s tour proved to be a resounding success! A result of a partnership between Children First/ Communities in Schools and the Junior League of Asheville, this community field trip to make citizens aware of issues pertaining to children in the region was well attended by community leaders and concerned citizens. Among attendees were Jane Whilden from the North Carolina House of Representatives and District Court Judge Marvin Pope.

The focus of the 2010 tour was the impact of state budget cuts on our children and youth. Field trip attendees spent the day in the shoes of a child – either Jenny or Freddie. Each person was provided with an insurance card – Medicaid, Health Choice, private pay or no coverage at all. As the day progressed, various events happened to each child and based on the coverage provided, actions were read to determine the fate of the child. 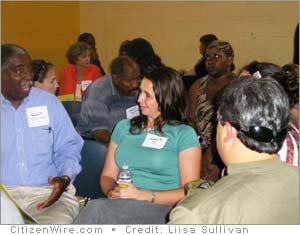 The tour kicked off with a lunch provided by Clingman Café and a presentation by Rob Thompson of Covenant with North Carolina’s Children. His presentation included an activity where the audience had to make an effort to remove $3.5 billion to $6.5 billion worth of state-funded services in the areas of education, government, health and human services; justice and public safety; natural and economic resources.

Tour stops included: the day treatment program at Woodfin Elementary; The Department of Social Services; and the YWCA. At each stop a panel talked with the guests about topics ranging from foster care and mental health services to juvenile justice delinquency and prevention.

The tour culminated in the attendees breaking down into several groups to discuss their day’s experience. What happened to Jenny? Where did Freddie end up? Depending on the services that the child had, final outcomes varied. There was also a panel of youth and children there to talk about ways that various programs such as the YMCA and YWCA after-school programs, Mother Love and AmeriCorps programs have worked to change their lives.

During the actual bus rides, advocacy letters were discussed. Each guest was provided with three letters on the following topics: providing full funds to NC Health Choice program to ensure children are insured; re-authorization of child nutrition legislation; and a letter encouraging our delegates to take a balance approach to both cuts and revenue.

We also discussed four things that people can do on their own to address budget cuts that are impacting our children and youth:
1. Contact legislators
2. Communicate to the media
3. Continue to learn
4. Contribute time and money.

View all posts by Liisa Sullivan →