You are here: Home › California’s Ferrets Anonymous says It’s Past Time to Legalize our Furry Friends
By Topher J. Zane on July 27, 2010 in All Stories Index, National News, Politics 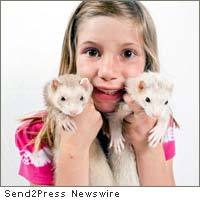 LA MESA, Calif. (CitizenWire) — According to Ferrets Anonymous, legalizing pet ferrets affects hundreds of thousands of Californians, even though many citizens may be unfamiliar with the State’s 77-year-old ferret ban. The California Veterinary Medical Association has long agreed that pet ferrets should be legal. State legislators agreed six years ago.

But the Governor blocked ferret legalization, when he vetoed the Ferret Amnesty Bill (9/30/2004). Schwarzenegger said: “I love ferrets. I co-starred with a ferret in Kindergarten Cop. However, this bill is too bureaucratic and it legalizes ferrets prior to conducting an environmental impact report.”

The requested Environmental Impact Report (EIR) is nearly complete, and the evidence clear. Leading SSU researcher, G. O. Graening PhD, reports: “None of the questionnaires, [which were sent to] every wildlife agency, health department, and agricultural department in the 50 U.S. states and Canadian Provinces, received to date have documented the establishment of any feral breeding populations, or negative interactions with wildlife, or significant impacts on human health or safety.”

The political climate surrounding ferret legalization puts the Department of Fish and Game (DFG) at center stage. The DFG has gone to great lengths to resist ferret legalization, by identifying domestic ferrets as “wild animals.” That’s like saying your Yorkie dog is dangerous because his origins trace back to the wolf family.

Let’s face facts too: Ferrets live in the homes of over 100,000 Californians. California’s vets are allowed by law to treat pet ferrets. However, the climate of illegality undermines access to proper care.

Castro Valley Vet Rene C. Gandolfi said: “I have been treating ferrets here in California for over twenty years. In that time I’ve seen all sorts of problems resulting from the ban on ownership.” Ferret owners delay treatment or must travel vast distances to get veterinary help, according to Gandolfi. “I’ve seen pet owners traveling hundreds of miles to find a veterinarian who was willing to see them. In a couple of severe emergency cases , ferret owners had to make hour long trips to see us because they couldn’t be seen at a vet closer to home. That’s like making a human drive to Sacramento to get to the ER after having a heart attack in San Francisco.”

Gandolfi explains why the CVMA backs ferret legalization: “It is bad medicine and bad public health policy to have a pet species that isn’t receiving regular and competent veterinary care.”

Gandolfi dismissed suggestions that ferrets are dangerous to humans: “For over two decades we have been providing veterinary medical and surgical services for ferret owners. I have yet to meet a ferret that I felt posed a significant danger to any humans who might handle it. I have often told my staff that I am more concerned about being bitten by a hamster than by a ferret.” Gandolfi explained that the dangers he sees are not due to ferrets, but to the fearful and unsafe legal climate. Ferret owners are “constantly worried that their cherished companion will be confiscated.”

Inadequate access to medical care stands at odds with the reality of widespread ferret ownership in California. A leading pet industry trade group confirms that 27% of the nation’s ferret supplies are purchased in California.

Owning ferrets is legal in 48 other states. veterinarians, scientists, elected officials and pet owners have effectively advocated for legalizing ferret ownership. The Governor’s questions have been answered by the EIR. Encourage the Governor and your representatives to support the Ferret Amnesty Bill, and enable sound scientific reason to trump politics once and for all in the ferret debate. Ferret owners have waited long enough: its past time to overturn the 1933 ferret ban.

Additional links related to above text:

News Source: LegalizeFerrets :: This news story was first issued by and is Copyright © 2010 the Neotrope® News Network – all rights reserved. Originally published on CitizenWire™.