You are here: Home › 97 Pound Woman Attempts Guinness World Records (Set by Men) to Lift Over 90,000 Pounds in One Hour
By Roderick Kinnison on July 22, 2010 in All Stories Index, Entertainment, National News 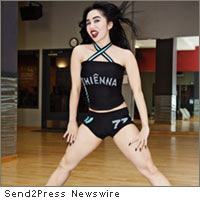 SAN FRANCISCO, Calif. (CitizenWire) — Thirty years ago, Thienna Ho and her family were Vietnamese boat people who survived a brutal attack by Thai pirates during a treacherous voyage on their way to their new home in San Francisco. Now Thienna is a super-athlete who has broken Guinness World Records (GWR) for feats of strength and endurance.

On August 14, 2010 she plans to take the men’s Guinness World Record for the most weight dead lifted in one hour. Athletes who heard of this news said “it is just impossible for a 5 feet tall female, weighing nearly 97 pounds, to break this world record!” This event will be streaming live FREE over the Internet for those curious to see if Thienna can dead lift and shatter the world record!

Thienna is not only a super-athlete but also a nutritional scientist. Thienna credits her endurance and strength to her sulfur rich diet which she developed during years of research and testing on how foods affect skin health, complexion, and fitness. She is eager to show the world that you do not need drugs or steroids to be strong and harness tremendous endurance. You just need to eat the right foods.

Thienna’s cookbook has been widely anticipated. Everything you want to know about how she eats, prepares food, and all other secrets are packed in her ground-breaking book, “Cooking on the Light Side: Smart Recipes for Bright Skin and Vitality” (ISBN: 978-0-9792103-7-2).

Note: Attendees are advised to arrive at approximately 12:00 p.m. to allow for parking time. Private parking will be available for media only.

News Source: Thienna Ho :: This press release was first issued by Send2Press® and is Copyright © 2010 Neotrope® News Network – all rights reserved. Published on CitizenWire™ under license.

Corporate Social Responsibilty: Support a Children’s Charity and Get Free Services to Promote Your Small Business
Robert B. Camp’s New Book Helps Small Businesses Save Themselves and Help May Save America