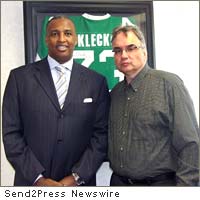 NEW YORK, N.Y. (CitizenWire) — As a financial commentator, Peter Grandich always has something to say and his opinions and forecasts are sought-after by hundreds of thousands on his daily blog, The Grandich Letter. Yet, in over 25 years of broadcasting his opinion, Grandich has never endorsed a candidate for political office. Until now.

“I know Michel Faulkner personally, and know he is a godly man who has been blessed with wisdom and compassion and a true desire to help his fellow human beings. Michel’s enthusiasm is real. He will make a great congressman,” Grandich adds.

Faulkner replies, “It thrills me to have people like Peter Grandich back me for office. It is through business leaders like Peter that America will be restored. His endorsement means more to me than any political endorsement because it’s from the heart of a guy who really understands what I am trying to do.”

Faulkner went on to express his belief that without new leadership in Washington D.C., our children and grandchildren will pay the price for our society’s corruption and materialism, and he is making it his personal mission to help restore the faith in our democracy.

“We are allowing the American dream to be stolen from this generation through a culture of greed and idolatry,” he says. “We don’t have a moral compass anymore.”

Faulkner, a Republican, is running for the seat currently held by Charles Rangel.

Peter Grandich, who hails from the Bronx, says of Rangel, “Charles Rangel is everything that’s wrong with Washington. America is facing our greatest crisis ever and we mustn’t allow the people who helped get us into this mess be the ones to decide how to get us out if it.”

Michel J. Faulkner, 53, knows what it’s like to have to work hard to achieve one’s goals. Born in Baltimore to a 21-year-old, single, working mom, Michel excelled in high school sports and went on to become an All-American at Virginia Tech while obtaining his bachelor’s degree. He played one season with the NY Jets before being sidelined by injury.

Michel returned to Virginia Tech to obtain his master’s degree in education and career counseling, and became assistant dean of students at Liberty College before being promoted to VP for Urban Ministry. With a penchant for serving the poor and disadvantaged, in 1988 he returned to New York to accept the position of Assistant Pastor and Director of the Lamb’s Church in Times Square. A year later, he joined Calvary Baptist Church in Midtown Manhattan and was ordained in 1991.

In 1993, Reverend Faulkner became the Senior Pastor of Central Baptist Church in Manhattan. He also served the people of New York as a member of Rudy Guiliani’s Task Force on Police Community Relations, Commissioner of the City Charter Review initiative, Co-Chairman for the New York City Board of Education’s HIV/AIDS Task Force, and Vice President for Community Government Relations at King’s College.

In 2005, he started the Institute for Leadership (IFL), a non-profit organization focused on developing leaders, and in 2006 he founded New Horizon Church of New York in Harlem.

Peter Grandich is founder of Trinity Financial Sports & Entertainment Management Company, which offers a variety of services for individuals and small to mid-sized businesses. With the assistance of former New York Giants running back and two-time Super Bowl Champion Lee Rouson, co-founder and company consultant, Trinity Financial offers specialized services for professional athletes and entertainers. Grandich is also a member of the National Association of Christian Financial Consultants. The company is located at 2431 Atlantic Avenue, Manasquan, NJ. For information about Trinity Financial, go to www.TrinityFSEM.com .

Peter Grandich is also founder of Grandich Publications, LLC, which publishes The Grandich Letter. First printed over 25 years ago, it is now read online at www.Grandich.com .

News Source: Peter Grandich :: This press release was first issued by Send2Press® and is Copyright © 2010 Neotrope® News Network – all rights reserved. Published on CitizenWire™ under license.