You are here: Home › Analyst James Foxx says 31 Percent of Home Sales in First Quarter of 2010 were Foreclosures
By Topher J. Zane on July 12, 2010 in All Stories Index, National News, Real Estate 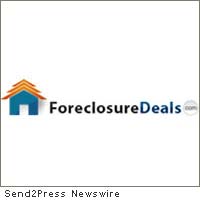 MIAMI, Fla. (CitizenWire) — Foreclosure Deals, an online leader in the foreclosed homes for sale listings and information industry, announced today that 31 percent of all residential properties sold in the first quarter of 2010 were foreclosure properties. Experts at the company believe the statistic shows that people are continuing to turn to the foreclosure market as a plentiful source of low cost homes.

“Buyers are attracted to foreclosures because they offer tremendous discounts,” remarked James Foxx, a business analyst with Foreclosure Deals. “The numbers show that each year, the total number of foreclosures sold has increased, and that’s not just a reflection of supply. They’re very popular, and for good reason, there’s no better investment value in real estate currently out there.”

Bank-owned and REO properties accounted for 19 percent of all residential sales during the first quarter, with an average market value discount of 34 percent. Pre-foreclosure homes, or homes in default, accounted for 12 percent.

Ohio had the highest average discount on a foreclosed home in the first quarter, at 39.5 percent below market value. Close behind were Kentucky and Illinois at 39 percent, and California and Tennessee at 37 percent.

“The statistics show that buyers and investors are getting some great deals,” said Foxx. “And you don’t have to buy in the really tough markets, like Las Vegas, NV or Phoenix, AZ to find them.”

The average discount on a foreclosure home nationwide has risen from 21 percent to 27 percent since 2006.

News Source: Foreclosure Deals :: This press release was first issued by Send2Press® and is Copyright © 2010 Neotrope® News Network – all rights reserved. Published on CitizenWire™ under license.