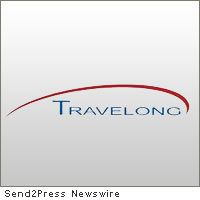 NEW YORK, N.Y. (CitizenWire) — Travelong, a management company providing business travel and meeting planning services to corporations and independent agents, has recently been honored as a recipient of the Million Dollar Award for 2009 by China Airlines.

“This trophy is presented by China Airlines to Travelong Inc., to express its profound gratitude for your outstanding achievement and contribution in the year 2009. We value your continued support, and wish you every success and prosperity in the future,” said Benjamin C.L. Yang, the General Manger of China Airlines.

Travelong is one of only seven industry leaders that were recognized with the Million Dollar Award. This annual award is given to agencies that reached one million dollars in net sales for China Airlines during the fiscal year. The awards ceremony was held at the Capital Grille Restaurant on 42nd Street.

“We are thrilled to receive this prestigious award from China Airlines, and are inspired to work just as hard in 2010,” said Sam Jain, the CEO of Travelong Inc.

Travelong has also recently been honored as a recipient of Sabre Travel Network’s first ever Peak of Excellence award for its achievements in 2009 and is ranked number 13 on Travel Weekly’s prestigious 2010 Power List, placing it alongside other industry leaders such as Expedia, Orbitz, Priceline and AAA.

Travelong, established in 1933, is located in New York City and serves more than 100 corporate clients and 30 home based agents and independent contractors across the United States. Travelong offers travel management, online travel bookings, and technology development for the travel industry.

News Source: Travelong :: This press release was first issued by Send2Press® and is Copyright © 2010 Neotrope® News Network – all rights reserved. Published on CitizenWire™ under license.