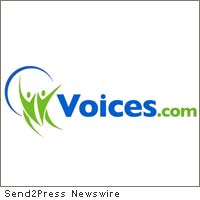 LONDON, Ontario (CitizenWire) — Time is money, and when both are of the essence, there’s a need for speed that cannot be ignored. Voices CEO David Ciccarelli and his team recently revealed the newly redesigned site to their customers and have received a significant amount of support from members of the service, particularly as it relates to how quickly the website pages load.

For a Web-based service that helps to make the world sound good, it was imperative that individual page loading time increased ten-fold to allow for customers to upload, listen to and download audio files with ease.

Voices.com‘s page load time has been reported as fast as 963 ms, which is ten times faster than the 15.30 seconds previously reported by Pingdom, a website monitoring and measurement service.

A significant amount of time was spent on the user interface design to simplify the layout, making it easier to read critical information on each page. Voices.com worked with user interface designers, user experience designers, performed split tests with Google Website Optimizer, tracked clicks and mouse movements with CrazyEgg and conducted first hand research with UserTesting.com, implementing changes based upon feedback received via several thousand responses to design and usability surveys. Once the designs were built, voice talent members participated in a Beta Testing program and contributed their findings for review. All of the feedback from the beta testers was positive. This was a 12 month process and the company feels confident with the resulting website.

News Source: Voices.com :: This story was issued by Send2Press® and is Copyright © 2010 Neotrope® News Network – all rights reserved. Published on CitizenWire™ under license.