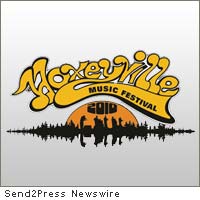 WELLSTON, Mich. (CitizenWire) — This year marks the eighth year of the Hoxeyville Music Festival. And, this week, festival organizers announced the addition of the world famous drumming duo – the Rhythm Devils – featuring Mickey Hart and Bill Kreutzmann, originally of the Grateful Dead.

Hart and Kreutzmann have a reputation for having transcended rock and roll stereotypes through their polyrhythmic explorations of the world of percussion, using an extraordinary variety of instruments and approaches.

The Hoxeyville Music Festival is scheduled to take place from August 20 through August 22, 2010 in the heart of the Mainstee National Forest, about 40 minutes south of Traverse City, MI.

Also scheduled to appear at this three-day event are Keller Williams, often referred to as “a one-man-band;” Karl Denson’s Tiny Universe; The New Deal, who have inspired audiences of all kinds; Steve Kimock and Crazy Engine; Todd Snider; Greensky Bluegrass, traditional bluegrass to make anyone feel comfortable and at home; Seth and May; and a host of outstanding talent from around the country – in all, over 35 bands.

The main stage is located adjacent to two modern campgrounds and thousands of acres of national forest. Camping opportunities range from VIP to general admission and quiet camping options.

“The setting has everything that makes northern Michigan great,” remarked Jake Robinson, an event organizer. “Woods, water, fresh air – this is a weekend that lets you get back to nature and back to real, honest music making.”

Hoxeyville has established itself as a music festival for music lovers,” Added Robinson. “It’s the perfect size, large enough to draw national acts, but small enough to make it manageable. So everyone winds up in a spot that lets them really enjoy the performances.”

Tickets are $99 and include on-site car camping. $130 at the gate. The festival gates open at 10 a.m. on Friday, August 20th. For ticketing and more information, visit: www.hoxeyville.com .

News Source: Hoxeyville Productions LLC :: This story was issued by Send2Press® and is Copyright © 2010 Neotrope® News Network – all rights reserved. Published on CitizenWire™ under license.