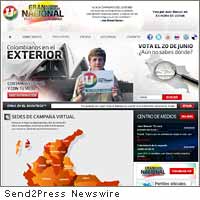 BOGOTA, Colombia (CitizenWire) — Nearly half a million Colombians logged on to SantosPresidente.com between June 1st and June 20th, the second round Presidential elections to follow the Santos campaign and the Candidate’s initiatives, turning the tide in this historic political victory. In under 72 hours, 1,076 individual Web pages, comprising the first-ever Virtual Headquarters used for Presidential Elections in Latin America, had been launched offering multiple ways to engage, support and follow the candidate.

“I am surprised at what developed here in Colombia for the last 50 days in the digital space. In ten years in online politics I have never seen such a quick and strong impact in a democratic process as I saw in Colombia,” said Ravi Singh, ElectionMall.com CEO.

When the digital initiatives began on May 3rd, Juan Manuel Santos was 12 points behind colorful candidate Antanas Mockus in the polls. The first-round results yielded 46% preference for Santos, totaling nearly 7 million votes and almost doubling the opposition. On Sunday 20th, a whopping 9 million Colombians elected Santos as their new President, the highest recorded voting in the country’s history, along with a 70% lead. For a people who didn’t quite grasp the power of digital media before the 2010 Presidential Elections, history was broken in two.

Among the innovations nurtured in the process are a first-ever iPhone App for a political candidate in the country; more than 4 million email opt-in email addresses were assembled; the first advanced team feeding live streams via Ustream with iPhones; an SMS short code with all national carriers for opt-in SMS strategies; Pop-Corn parties (with instructions!) to watch presidential debates online, a Wall of Shame to end dirty war across all social media and personalized merchandising downloaded from the site for each city and county nationwide.

SuperSantos, the game where candidate Juan Manuel Santos fights poverty, corruption, unemployment and drug trafficking was at full-blast. Citizens entering their voter IDs were seeing their exact voting location, along with digital maps and a suggested route, for the first time. This was the culmination of a 50-day Digital Revolution that catapulted Juan Manuel Santos in the polls from 12 points behind the colorful candidate Mockus, to the Colombian Presidency with over 9 million votes, the highest in the country’s history.

Through a series of initiatives that involved world-class vendors and brands including ElectionMall.com, Google, Microsoft, Ustream, Vimeo, Flickr, YouTube and local agencies and talent including Sistole, SigmaMovil and Servinformacion, the Web 2.0 Digital Victory Team of the Juan Manuel Santos presidential campaign have rocked Colombian elections and brought innovation to the digital democratic process in the entire Latin American region.

Following are relevant “before and after” stats for the Web 2.0 Digital Victory Team results:

News Source: Juan Manuel Santos :: This story was issued by Send2Press® and is Copyright © 2010 Neotrope® News Network – all rights reserved. Published on CitizenWire™ under license.