You are here: Home › Starlight Children’s Foundation Launches Blog ‘Starlight 365: Our People. Our Programs. Our Purpose’
By Topher J. Zane on June 14, 2010 in National News, NonProfit 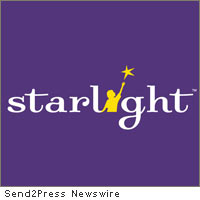 LOS ANGELES, Calif. (CitizenWire) — Starlight Children’s Foundation has just unveiled its blog, “Starlight 365: Our People. Our Programs. Our Purpose.” The blog will serve as an interactive and engaging online community that connects stakeholders to stories, images and videos that spotlight the programs, campaigns, events, families, and supporters of Starlight Children’s Foundation, as it works hard to brighten the lives of seriously ill children and their families, a little each day.

“Starlight has stories to tell, accomplishments to share and a bright future to work towards-and Starlight 365 will help us accomplish all of this,” said Paula Van Ness, CEO of Starlight. “It’s more than just a blog. It’s the perfect tool that connects the world to Starlight and at the same time lets Starlight openly communicate news of our work with stakeholders and bring attention to the importance of helping seriously ill children in need.”

As a way to identify the many important faces that are a part Starlight, the blog will also feature a regular rotation of contributors made up of Starlight’s own corporate partners, children and families, celebrity supporters, staff members, and more who will open up about their thoughts and experiences with Starlight.

Starlight founder Peter Samuelson will be the first of these guest contributors and the writer behind Starlight 365’s official inaugural blog post. Samuelson shares the story of his involvement in the early days of Starlight’s Fun Center(TM) program back in the mid 1980s.

“Using an 11-foot bamboo pole with an eraser strapped to one end with surgical tape, the child reached across the room to the TV, attempting to poke the buttons to change the channel. That sight was my epiphany: I realized that pediatric patients needed easy access to electronics and entertainment while in their hospital beds. It seemed crazy that if audio-visual technology existed in the world, none at all had made it into this children’s ward,” writes Samuelson.

Since then, the Fun Center program has become a cornerstone at Starlight, with more than 6,000 Fun Center mobile-entertainment units placed in more than 1,300 hospitals across North America.

When a child or teenager has a serious medical condition, everyone in the family is affected. For more than 25 years, Starlight Children’s Foundation(TM) has been dedicated to helping seriously ill children and their families cope with their pain, fear and isolation through entertainment, education and family activities. Starlight’s programs have been proven to distract children from their pain, help them better understand and manage their illnesses, and connect families facing similar challenges so that no one feels alone.

Through a network of chapters and offices, Starlight provides ongoing support to children, parents and siblings in all U.S. states and Canadian provinces with an array of outpatient, hospital-based and Web offerings. Programs are also delivered internationally through affiliates in Australia, Japan and the United Kingdom. To learn more visit www.starlight.org .

News Source: Starlight Children’s Foundation :: This story was issued by Send2Press® and is Copyright © 2010 Neotrope® News Network – all rights reserved. Published on CitizenWire™ under license.