You are here: Home › Ron Wilk, Author of Papal Rogues, Offers Informative New Blog on His Website
By Topher J. Zane on May 31, 2010 in Internet, National News 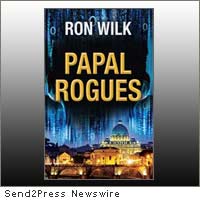 MIAMI, Fla. (CitizenWire) — When retired neurologist Ron Wilk began his second career as a thriller writer, people began asking how he made the transition. With the recent release of “Papal Rogues” by Langdon Street Press, Wilk created a blog on his website to address the many questions he has received from fans. On his website, www.ronwilkfiction.com, the author provides an informative blog where he discusses how he began this exciting new phase of his life and how others can learn from his experience.

Geared towards people who are facing the often abrupt and emotionally challenging changes life presents, Ron’s blog provides his personal insights into how he created a fulfilling new life after an injury forced him into early retirement. His fascinating journey has landed him interviews with the Palm Beach Post, Comcast Newsmakers and The Balancing Act on Lifetime television.

“When my first two internet thrillers had over 950,000 chapters downloaded, I realized that writing had become more than a hobby; people were responding to the characters and stories I created. Then with the release of Papal Rogues, I started to receive more questions as to why and how I became a writer.”

On Ron’s blog at www.ronwilkfiction.com, he has written several insightful and informative articles about his personal journey from neurologist to novelist and how people can create a new purposeful life for themselves.”

Ron’s website also features details about his current thriller Papal Rogues, which explores the secret world of computer hacking. The book opens with the murder of a young hacker who discovers something that was meant to remain hidden. As the dramatic “what if” scenario unfolds, Wilk takes readers on an adrenaline pumping ride and draws them into the clandestine underbelly of international corporations, the US military and most surprisingly, the Vatican. Papal Rogues is available at Amazon.com and all major booksellers.

Also on www.ronwilkfiction.com are two free books to download. Red Death is an engrossing and romantic thriller about a dashing doctor’s battle with an underground terrorist organization seeking revenge, and Kerberos is a riveting psychodrama, not for the faint of heart.

News Source: Ron Wilk :: This story was issued by Send2Press® and is Copyright © 2010 Neotrope® News Network – all rights reserved. Published on CitizenWire™ under license.