You are here: Home › Santos Campaign Making History: Juan Manuel Santos is First Politician in South America to Launch Campaign Through the Internet
By Roderick Kinnison on May 5, 2010 in National News, Politics 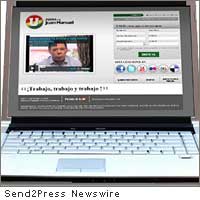 BOGOTA, Colombia (CitizenWire) — Political campaigns in Latin-America have always been marked by traditionalism, manifestations, crowded plazas and message distribution through traditional media such as television, billboards, written press and radio. Never before has voter outreach been conducted through the Internet and other new media technologies.

Since Obama’s successful presidential campaign in 2008, a campaign noted for its use of Internet based tools in a massive and systematic way, the art of running a campaign has been revolutionized. Today, that revolution has arrived Colombia Juan Manuel Santos, Colombian presidential candidate for the U Political Party, is launching a new campaign and is inviting every Colombian to participate using a video on his Web site www.santospresidente.com, to join his army of volunteers before the presidential primary on May 30th, 2010.

Additionally, he is inviting every Colombian to join his campaign through social networks such as Facebook, Twitter and Hi5.

Santos, a native to Bogota and a Harvard University graduate, served as the Minister of National Defense before his run for President under President Uribe.

“We recognize that the power of Internet is underestimated, but we are changing our perspectives, to correct this,” Stated Santos. “We will put everything into it and nothing will stop us. We will use the latest technology to promote democracy and show the world what it means to be a Colombia, we will use the Internet to mobilize our followers.”

Juan Manuel Santos will become the first politician in Colombia and Latin America that will use these tech tools to launch his presidential campaign.

You can visit his campaign Web site at www.SantosPresidente.com and become a volunteer or join one of Santos’ social networks.

News Source: Juan Manuel Santos :: This story was issued by Send2Press® and is Copyright © 2010 Neotrope® News Network – all rights reserved. Published on CitizenWire™ under license.