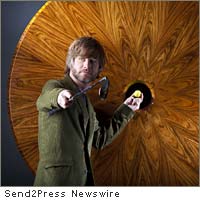 LOS ANGELES, Calif. (CitizenWire) — Tabloid artist Xvala will introduce his latest art piece, the “Tiger Woods Rambovian Rosewood Glory Hole And Golf Furniture” in a soon to be revealed location on April 21st in Los Angeles, California. Today Tiger Woods returns to the PGA to contend at the 2010 Masters after a five month hiatus and media frenzied exploitation of his private affairs. In his return, Woods will have the support from some, including the notable sponsor Nike, as well as, face challenges and new allegations such as his involvement with performance enhancing drugs. The backlash and attention Woods has received isn’t a shock, but Xvala’s answer to it has people interested in Rambovian furniture and glory holes.

“I want to show that political correctness hasn’t crushed the humanity out of everything,” says Xvala.

The urban dictionary refers to “Rambovian” as a slang term inspired by the hard-hitting and unapologetic Sylvester Stallone character “John Rambo.”

“Xvala has created a new innovation that will have people questioning art and the proper use of their furniture,” says publicist Cory Allen.

The “Tiger Woods Rambovian Rosewood Glory Hole and Golf Furniture” is 60 inches in diameter with a super high gloss reflective surface and a six inch hole in the center. The glory hole tabletop was fabricated under the direction of the artist by a commercial furniture maker that has an established working relationship with high-end gaming and resort brands such as Wynn Las Vegas, Bellagio Las Vegas and with Trump.

One of the artist’s most well-known works is the recent construction of “The Brangelina,” a 4,000 sq. ft. house, covered in graffiti and hosts the ceiling piece, “Brangelina Forever” by sculptor Daniel Edwards.

A video highlighting the piece “Fashion Shoot – The Decline Of Western Civilization : A Golf Odyssey” was released can be seen on YouTube at http://www.youtube.com/watch?v=MmDxjYPqybI .

No celebrity endorsement claimed or implied.

News Source: Xvala :: This story was issued by Send2Press® and is Copyright © 2010 Neotrope® News Network – all rights reserved. Published on CitizenWire™ under license.