You are here: Home › Guadalupe Cooling of Nipomo, CA has obtained a license to use Value Recovery’s methyl bromide emissions control technology
By Roderick Kinnison on December 13, 2010 in All Stories Index, Business, National News 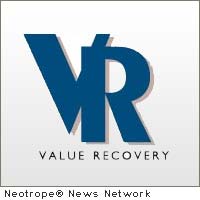 BRIDGEPORT, N.J. (CitizenWire) — Value Recovery, Inc. announced today that Guadalupe Cooling of Nipomo, CA has obtained a license to use Value Recovery’s methyl bromide emissions control technology for its new Quarantine and Pre-shipment fumigation operation. The facility will be constructed by Controlled Environments Construction of Tustin, CA who are major US building contractors in the agricultural sector.

The technology is comprehensive, chemically destroying over 90% of the methyl bromide released from a fumigation facility while producing no hazardous byproducts. The company plans to raise the destruction level to 95% within three years.

Value Recovery’s technology has been granted the status of Best Available Control Technology (BACT) and is becoming recognized as the most economic and environmentally acceptable method for the continued use of methyl bromide.

Peter J. Joyce, President of Value Recovery says; “Up until the 1970’s the chemical industry vented its pollutants directly into the atmosphere and up until the 1990’s the same can be said for the automobile industry. We look at the introduction of this technology as a natural progression that will be used by those forward thinking agricultural companies who are truly dedicated to lessening their environmental footprint.”

Value Recovery is an environmental research company focused on removing and destroying hazardous chemicals with its patented reactive separations technology. Besides destroying fumigants, the company has technology for destroying water soluble pollutants such as phenols, cyanides and acrylates. The company was founded in May, 2000.

New on DVD: Raymond Berry’s Receiving Fundamentals
All Port Jobs announced this week the launch of a new job board that covers the spectrum of transportation