You are here: Home › Editor of of the Grandich Letter writes foreword in Michel Faulkner’s new book ‘Restoring the American Dream’
By Roderick Kinnison on October 15, 2010 in All Stories Index, Books, National News 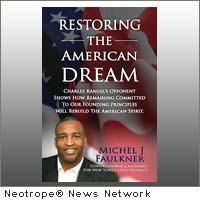 “Michel Faulkner has written what I consider to be a moving and foundational book and must-read for every American, Restoring the American Dream,” says Grandich.

“Though each of us likely has a different vision of the American Dream, Faulkner’s Restoring the American Dream is universal to all of us. It’s about hope and courage; family and country; commitment and service. Faulkner is a bona-fide, honest, caring, loyal American who wants nothing but to serve,” he adds.

The book underscores Faulkner’s political philosophy and outlines his roadmap for bringing his vision of the American Dream within reach for disenchanted citizens. “Democracy is not easy and it is not free. It requires work,” he states in the book. “The United States has been built and sustained largely by the pursuit of what we commonly call the ‘American Dream’: life, liberty, and the pursuit of happiness.”

He says the present climate of greed and corruption is undermining the structural fabric essential for the survival of the American Dream. It reads, “It is time for a wake-up call! Our generation must understand that the American Dream is in danger of being lost-perhaps forever. We have to restore faith in the basic American ideals of justice, honesty, civility and integrity.”

“This is great reading from a good man, and that’s why I endorsed him for office, as did Newt Gingrich,” explains Grandich. Newt said, “I believe in what he says in his book, Restoring the American Dream, and I believe Harlem, New York and our nation will benefit from his addition to Congress.”

Peter Grandich is founder of Trinity Financial Sports & Entertainment Management Co., www.trinityfsem.com, and Grandich Publications which publishes The Grandich Letter at Grandich.com. To learn more about Grandich go to www.Grandich.com .

To order your copy of the book for $14.99 go to http://www.RestoringTheAmericanDream.us .