You are here: Home › New Country Classics from Joss and Colosio on ‘A Couple of Strangers’
By Roderick Kinnison on July 26, 2010 in All Stories Index, Music, National News, Videos 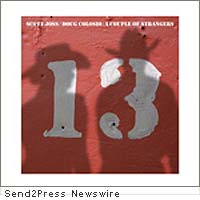 “We are proud to play country songs that are the real deal,” Joss says. “And we play them the way we think they should sound,” Joss adds, “not like any kind of processed music.”

“These songs are not pop or country-rock or any of that assembly-line cookie-cutter stuff,” Colosio states, “this is real music.” Both Joss and Colosio are current members of Merle Haggard’s band, The Strangers, and they feel they are honoring a strong tradition of remaining true to the roots of country, roadhouse swing and Americana music.

Ten of the 13 songs on “A Couple of Strangers” were composed by Joss and Colosio, and they co-wrote the others. Songwriters collaborating with the duo on these remaining tunes include Wayne Dean and Doug’s brother Greg Colosio. All songs are on iTunes.

Videos for five of the Joss and Colosio songs are on YouTube and FookMovie.com. The album cover composite photograph and art direction are by Phil Hatten Design.

Songwriter, fiddle player and guitarist Scott Joss has worked with Dwight Yoakam, Willie Nelson, George Jones, Heather Myles, Carlene Carter, and Rosie Flores. Born in Long Beach, California, Joss learned to play fiddle from Jana Jae, fiddle player for Buck Owens & His Buckaroos. Winner of numerous California State Fiddle Championships, at the age of 18 he joined Merle Haggard and his first show as one of the Strangers was at Carnegie Hall.

Songwriter and keyboard player Doug Colosio has performed with Willie Nelson, Merle Haggard, Charlie Pride, Jewel, and many other chart-topping country and crossover artists. He regularly plays with Merle Haggard and has appeared with some of the most important figures in today’s music. His solo album, “American Piano,” is part of the Sony music creation series.

News Source: Golosio Publishing :: This press release was first issued by Send2Press® and is Copyright © 2010 Neotrope® News Network – all rights reserved. Published on CitizenWire™ under license.