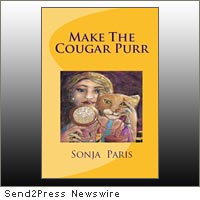 PERRYSBURG, Ohio (CitizenWire) — Tired of romance novels that just portray young women with bodies to die for, novelist Sonja Paris tried a new approach in her first novel “MAKE THE COUGAR PURR” (ISBN: 978-1452824543). The novel is now available at Amazon.com and other online bookstores.

“I wanted to create a book with characters I can relate to, not to escape to,” says Paris. “A middle-aged woman like me on her desperate search for contentment by almost all means – without boundaries or limitations about sexual descriptions and language. After all, women in their forties are very sexual beings. And it seems as if society in general just starts to realize that fact!”

This book is about betrayal, loss and sexual identification, and even though Sonja Paris put her work into a fictional “skeleton” its “vital organs” are in part based on autobiographic reflection of her own very turbulent life.

“Being married to a rock star like my late husband Johnny Paris has shaped me in some form, and also, who the main characters in my book are. Don’t expect a widow like me to be tame, or her writing style and book content, for that matter,” she adds.

Paris’ writing style combines all the five senses with raw sex and deep-felt emotions, described so vividly, as if watching a screenplay.

“MAKE THE COUGAR PURR” depicts the life of Hannah, a middle-aged German woman in a small town in Ohio. Constantly betrayed by her husband, she drowns her sorrow in booze and spends his money freely, until he reveals to her that his last affair with a much younger woman is based on true love and not on pure lust. Driven by rage and desperate to find a new identity for herself, Hannah turns into a prancing cougar on the hunt and stumbles from one sexual escapade into another on her search for true love.

Sonja Paris’ next book, a biography of her late husband Johnny Paris of Johnny and the Hurricanes, written in collaboration with her co-author Duane Thomas, will hit the market end of this year published by Bank House books out of the UK.

News Source: Sonja Paris :: This story was issued by Send2Press® and is Copyright © 2010 Neotrope® News Network – all rights reserved. Published on CitizenWire™ under license.