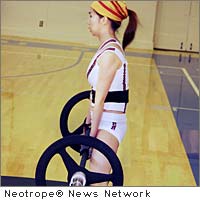 SAN FRANCISCO, Calif. (CitizenWire) — Athletes who heard the rumor said it couldn’t be done. How could a 5-foot woman, barely weighing in at 95 pounds compete with professional weightlifting men to set a new world record? On August 14, at St. Emydius Gym in San Francisco, Dr. Thienna Ho showed them how as she set the new Guinness World Record for the heaviest sumo dead lift in one hour.

The barbell weighed in at 45 pounds, 13 ounces (nearly half her body weight). In order for each lift to be counted, she had to achieve wide stance sumo leg spread where her feet were pointing at a nearly 90-degree angle; touch the barbell to the floor; and completely straighten her legs. Sumo dead lifts solely use the hip and leg strength to push the barbell off the floor which requires tremendous flexibility.

Some weight lifters said that since Thienna was lifting light weight; it was easy. Thienna disagrees.

While Thienna is no stranger to setting world records (she has four under her belt), she does admit that this was the toughest. Other records include: most sumo squats in one hour (5,135); the longest Samson’s chair (static wall sit) – 11 hours, 51 minutes and 14 seconds; and the heaviest deadlift in one minute (3,864 pounds).

“I am not a weight lifter. In fact, I have never lifted a weight in my life,” Thienna says. “Prior to setting this record, I trained for four months, two to three times per week to test my endurance and ate a sulfur-rich diet.”

Thienna is such a believer in the benefits that foods rich in sulfur can deliver that she recently released a new cookbook, “Cooking on the Light Side” (ISBN: 978-0-9792103-7-2) which offers 160 recipes for meat lovers and vegetarians, alike. Even people with a sweet tooth will find dairy-free recipes that are sure to make them smile.

“Cooking on the Light Side,” stresses amazing skin, vitality and robust health. The sulfur-rich recipes help with age spots, acne, hyper-pigmentation and more. She showcases and demonstrates how to incorporate at least 50 varieties of sulfur-rich vegetables into the diet, and provides tips and tricks for prepping and cooking sulfur-rich foods to extract maximum nutritional benefits.

Thienna credits her endurance to her sulfur-rich diet. She says that these foods improve strength, stamina, skin tone and overall health. She eats sulfur-rich vegetables such as cabbage, onions and garlic because she has discovered that sulfur cleanses the body and pumps more oxygen into muscles. These record breaking feats are, no doubt, a testament to this.

Super-athlete and nutritional scientist, Thienna developed her understanding of sulfur-rich foods and how they interact with the body over years of research and testing. She is eager to show people that they do not need drugs or steroids to be strong and to harness tremendous endurance; they just need to eat the right foods.

To learn more about the new cookbook, “Cooking on the Light Side,” visit: www.CookingOnTheLightSide.com or www.thienna.com .

News Source for this Press Release: Thienna Ho :: This news release was first issued by and is Copyright © 2010 the Neotrope® News Network – all rights reserved. Originally published on CitizenWire™.